Campaigners in Hastings and St Leonards call on the Government to allow people seeking asylum in the UK the right to work.

Politicians, campaigners, celebrities and members of the public will gather on Saturday, 15th June to call on the Government to give asylum seekers the right to work in the UK.

This gathering is part of a series of events taking place across the UK throughout June organised by the Lift the Ban campaign – a coalition of close to 200 charities, think tanks, businesses, trade unions and faith groups calling for people seeking asylum to be allowed to work.

Speaking ahead of the event, Dr Felicity Laurence, Chair of Hastings Community of Sanctuary, said:

“Preventing people seeking sanctuary from working to support themselves and their families is unfair and inhumane. Current policy forces people to live in poverty while their talents are wasted, while our society loses out on a significant contribution to our workforce, often in jobs where people are desperately needed.

That’s why we’re calling on the Government to lead the way on this common-sense reform, which enjoys widespread public support.”

Currently, people seeking asylum in the UK can apply for permission to work jobs on the Government’s Shortage Occupation List, if they have been waiting for a decision on their asylum claim for over 12 months. The restrictive list includes jobs such as classical ballet dancer and nuclear medicine practitioner. In the meantime, they are given just £5.39 a day to support themselves while waiting months, often years, for a decision on their claim.

The One Hastings Many Voices event in Hastings on the 15 June from 7-10pm at the Greek Orthodox Church Hall will bring together members of the local community, with music, poetry, speakers, refreshments and information stalls. Participants will be asked to sign a petition and send postcards to the Home Secretary, Sajid Javid MP, calling on him to lift the ban on working for people seeking asylum. It is not necessary for him to change the law, just to amend existing regulations.

Earlier in the day, there will be stalls in Kings Road St Leonards, from 11am-2pm and in Hastings town centre to engage the local community in the campaign with petitions and leaflets.

Local borough and County Councillor, Trevor Webb, said: “I am proud to represent an area which is so diverse and enriched by the asylum seekers who come to St Leonards, many of whom stay when they have been granted leave to remain. Enabling asylum seekers to work would mean that they would be able to integrate into the local community with dignity as well as contributing to the local economy.”

• Further information about the campaign is available at www.lifttheban.co.uk 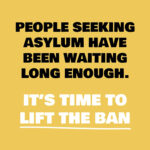 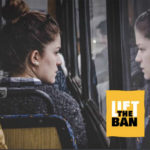