Building of the Queensway Gateway road, which will link the A21 at Sedlescombe Road North with the edge-of-town by-pass to West St Leonards – and, beyond, the Combe Valley Way to Bexhill – is set to resume this week. However, the new route is described as “temporary” by Sea Change Sussex, the road’s developer, while it continues to seek a compulsory purchase order of land on which a permanent roundabout can be laid out.

The above diagram shows what is intended. A roundabout connecting the Gateway road at its western end to Queensway has already been completed, and the road has been built 250 metres eastwards from there. The new stage of works will involve extending it 60 metres further east to join the old Whitworth Road and Junction Road via a T-junction controlled by traffic lights. In the process, businesses along the route will be given access. Meanwhile, Junction Road will be closed to traffic at both ends – where it meets The Ridge and where it joins Whitworth Road.

Sea Change aims to complete the temporary link “by early 2021”, according to its press release issued last week.

The stated intention is not only to reduce congestion and boost road safety on a network of roads in the area, particularly The Ridge. It will also, according to Sea Change, “support long-term job creation” by opening up access to areas zoned for commercial use in Hastings’ Local Plan, including the manufacturing site at North Queensway Innovation Park where they are bidding to receive £3.5m public funds from SELEP (the South East Local Enterprise Partnership) – see Sea Change: More of the Same in HIP 159.

The project is being supported by East Sussex County Council, which will be promoting temporary traffic regulation orders to enable the road closures. 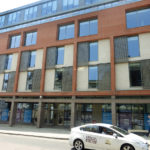