‘Levelling Up’ Hastings: in which direction?

Hastings is in line for up to £50m of Government money from another new fund. The Borough Council (HBC) and Hastings & Rye MP Sally-Ann Hart have a big call to make together on what to prioritise. Mrs Hart last week called for upgrading the rail line to London via Ashford. Will the council share her enthusiasm?

The Government has recently been announcing a whole host of initiatives and funds aimed at ‘levelling up’ the country. Ignoring for a moment a high suspicion of Conservative-held areas being put in preferred positions, these funds are supposedly aimed at some of the most deprived areas of the country. Hastings currently sits joint 17th on the Government’s own list of the most deprived local authority areas in England. However, there are multiple pots of money which are often overlapping and confusing: there’s the Towns Fund, the Levelling Up Fund, the UK Community Renewal Fund (eventually becoming the UK Shared Prosperity Fund), the Community Ownership Fund, and probably more (still with me?). But let’s untangle two most immediately important: the Towns Fund and the Levelling Up Fund.

An upgrade for the Hastings – Ashford line?

The Towns Fund was announced by Boris Johnson in 2019. It is a £3.6bn pot for 101 pre-selected towns around England to bid for – Hastings is one. The aim of the fund is long-term, sustainable economic growth for towns through regeneration: improving skills, business infrastructure, and local transport. The Hastings Town Deal Board submitted its proposals at the end of January, as reported in HIP – The Deal Revealed (Issue 169). It includes plans to make Hastings Castle a world heritage site, a new leisure centre in the town centre, new green skills hubs such as a new “green technology Centre of Excellence” at East Sussex College, and a programme to make the town centre leafier – dubbed “The Hastings Garden Town vision”.

If the bids are successful, they could be of big value. The whole plan asks for £28.2 million but estimates it will have added a total value of £448m to the local economy by 2035 through regeneration, employment, and other boosts to the economy. The proposals do well building on the town’s tourism industry, but need to do more to boost Hastings’ regionally successful manufacturing industry. The Government’s index for deprivation shows that Hastings is particularly weak for income, employment, and education, so bringing in more high-skill & high-wage jobs in manufacturing will be critical. Churchfields industrial estate gets an upgrade in the plans but there’s nothing to enhance manufacturing skills. The ‘green skills plan’ instead focuses on electric vehicle repair and housing.

More recently, the Government announced its Levelling Up Fund. This £4bn pot is available to all areas of the country, with each district or borough councils being offered up to £20m, or £50m for projects around local transport. However, some authorities including Hastings and Rother are offered greater priority and extra cash to put together strong bids.

What’s this money for? While the older Towns Fund is focused on economic regeneration, the new Levelling Up Fund is meant to focus on ‘highly visible’ infrastructure projects – things that locals can see, use, and feel direct benefit from. In reality, there’s a lot of crossover. Local transport schemes, urban regeneration and improving cultural buildings are all areas the Hastings Town Deal described earlier also try to improve.

So, how do the pots differ?  The council is still expected to put the bid together, but there is much greater expectation that the local MP should back a project. In Hastings, this means the Government expects Mrs Hart to put her name to a bid she thinks is a priority. But what could they pick?

One idea, given Mrs Hart’s parliamentary questions last week, would be to revive plans to quicken the rail route to London via Ashford. Previous MP Amber Rudd pushed for this repeatedly and failed. But Network Rail are due to report again in April and putting in up to £50m for a project expected to cost £100m or more could sweeten the deal.

Over in Rother, Bexhill & Battle MP Huw Merriman has also previously campaigned to speed the line from Bexhill and Hastings to London. As chairman of the Commons Select Committee for transport, he will know all about big transport projects. And Rother District Council also has up to £50m to spend.

If then Mrs Hart, Mr Merriman and the respective councils could work together and pool their money, quickening the line to London should be a priority and could be done. This would bring big economic benefits for businesses and locals in both areas through increased tourism and through greater connectivity for good quality jobs and businesses. The MPs have argued this too.

There are, however, alternative ways of enhancing local transport. Bus and cycle routes could be improved in a heavily car-dependent Hastings which currently has virtually no cycle lanes beyond the seafront. This would tick both the ‘highly visible’ box and other boxes on decarbonising and improving air quality, though could be controversial with drivers if not done well. Another less imaginative and not particularly green idea, but still hugely needed, would be to upgrade Hastings’ terrible pothole problem.

Beyond transport, the Levelling Up fund is meant for ‘urban regeneration’, for instance upgrading eyesore buildings or greening areas. If upgrading the rail line is deemed too expensive or complicated – we have been burned on this before – the focus for Hastings should be renewal and re-purposing the town centre. The Hastings Town Deal already gives a lot of space to this (remember the ‘Hastings Garden Town’ idea?) but given the centre’s steep decline and the collapse of retailers like Debenhams and New Look, there’s a huge case for going further and going faster.

Hastings is a wonderful town but one with some sticky problems in need of a lot of help and fresh thinking. So, what should they pick? 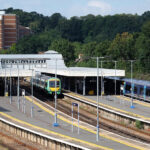