Widely published Hastings poet John D Robinson has at least eight chapbooks to his name (that I know of) and has featured in hundreds of print litzines, anthologies and underground online vehicles both here and abroad over recent years. His latest book is a full collection from Uncollected Press based in Maryland USA.

There’s everything to like about this just-published collection. For a start you get a full ninety-nine poems – and I mean decent length carefully crafted works, not simple four or eight-liners inconsiderately scribbled. Although, ironically, the poem that pierced my soul the most is the shortest one. More on that later.

Robinson writes about real characters within his true environment. If you’re familiar with the street life of Hastings & St Leonards you may even recognise some of his inspirations – and respect that fine balance between the tragedies and joys of life that he documents so well. There is no blatant identification of human subjects here, however, and his portrayal of lives lived to the full within their own boundaries of circumstance and opportunity is always related sensitively and without judgement, demonstrating an empathy that can often only come through shared experience.

Often writing about those with addictions, past or present, this poet sometimes alludes to his own. In ‘Poetry Free’ he gives an honest account of how even the act of creativity itself can drift into the realms of addictive behaviour. In a concentrated attempt to jump from that runaway train that is his inability to take a break from writing, he finds himself failing miserably. Any serious poet or passionate creative will surely identify with the power of such inherent motivation and drive, and how it can start to take over one’s life, often at the expense of other activities and interests. The bonus you get with Robinson’s prolific output is that any of it that makes it onto the printed page is good stuff, all the chaff having been discarded with careful discernment along the way.

Robinson tackles all the themes you would expect from an underground and outlaw poet who lives the life. It’s not simply sex and drugs and rock and roll, but the awkwardness of sexual encounters, the desperation of drug dependence and the rocking and rolling of uncertain and chaotic lifestyles. His own sensitive humility comes through no matter what he writes about and in the poem ‘Her Eyes’ he almost seems to be writing about his own writing:

“The fluidity of language softens and crumples like brittle cardboard,”

This underlying vulnerability within the words themselves is present throughout much of Robinson’s poetry, adding touches of beauty to his descriptions of tragedy and enhancing his own style of rawbleed realism. Whether any particular poem be a truly documented account or a combination of experience, observation and imagination, Robinson makes each one work. All his poetry makes you think. Sometimes it knocks you sideways.

A poem with the name ‘A Mother’s Response To Her Daughter After An Allegation Of Sexual Abuse’ is never going to be an easy read. This is the short poem I referred to above. Here, in five concise and simple lines, Robinson encapsulates one of the shocking institutionalised attitudes that lie at the heart of our society’s dysfunction. It’s a dirty business when the world doesn’t seem to care about the plight of the vulnerable, marginalised and manipulated. One of the functions of literature, and in particular poetry, is to address such terrible wrongs. Robinson excels at this. Hang in There is not just a poetry collection title but also a mantra by which to live our own lives.

• John D Robinson will be giving a rare public reading at Bookbusters for the next Sheer Poetry night, Thursday 20 June 6pm, and signing copies of the First Edition (a limited run of 100 copies) of Hang in There.

• If you can’t make this you can order Hang in There for £12 plus p&p through Paypal: [email protected] 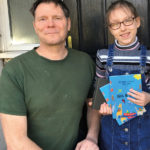