What might Sicily, lichen and Google have in common? The unlikely answer is Hastings Knitters – a local craft group asked at short notice to provide part of the set dressing for a worldwide networking event.

Hastings Knitters is around 20 people – including several from the Parchment Trust – who meet each Monday at the White Rock Theatre café to do something positive. Specifically, knitting and crochet for yarn bombings and festivals; blankets for people with Alzheimer’s and cuddly toys to comfort children visited by ambulances and fire engines.

“It’s important not just to knit but to have a social purpose, get out of the house and make money for charity,” says coordinator Rachel Holtom.

They certainly achieved the latter when approached by Hattie Spice, a set designer working on behalf of Google who needed two panels (70x90cm) representing lichen to be hung on olive trees at the last night of a recent conference on climate change.

Fortunately, the tightly knit (sorry) volunteers rose magnificently to the challenge and completed the task on time in just 14 days – not only raising £1,200 for charity but also (eventually) getting their work returned. “We really enjoyed it,” reveals Rachel, “People were united in a common task.”

It turned out more than worth the effort in terms of A-list appreciation, with celebrities such as Prince Harry, Naomi Campbell,and Leonardo DiCaprio jetting into the Palermo event.

Should any other multinational wish to offer them a similar challenge, Hastings Knitters are demonstrably up to the job. Meanwhile, once the lichen returns from its pan-European journey, they’re hoping to exhibit it locally. 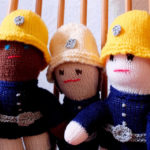 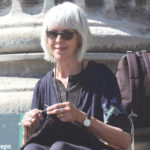