Sue Tilley’s made an indelible mark on the local arts scene since relocating to Hastings from London in 2017.

Her eclectic litany of job titles have included: benefits supervisor; till dolly at the notoriously decadent Taboo club in London; exhibited artist; and published author…as well as being a frequent model for a certain Lucian Freud.

However there’s much more to this unique and vivacious soul – in the last couple of years she’s fought and won a battle against breast cancer, all whilst maintaining her infectious ‘can-do attitude’ and effervescent sense of humor.

I caught up with Sue for a chat, about running life modelling classes online during lockdown, gossip sessions with Lucien Freud, thoughts on austerity and more…

Sue Tilley as drawn by Tina Mansuwan from Bangkok

You used to work as a cashier at Leigh Bowery’s infamous Taboo night club in London, which quickly became notorious for its avant-garde and fringe sensibilities. What impact do you think the scene has had on mainstream art and culture today? How do you think Leigh Bowery would feel about this legacy?

I’ve always said if you went to Taboo one of two things happened – either you died or became a great success! Lots of people from ‘the scene’ went onto establish themselves in the arts… the film director John Maybury, fashion designer John Galliano and even the girl band Bananarama – if you’ve heard of them – were all regulars at the club!

I think the club kids today are probably quite jealous of the fun we had – it was such a different time – our biggest excitement was getting our photo in magazines like The Face or i-D!

Gender fluidity and being non-binary are considered much more mainstream now. I’m still surprised when people are shocked by it though – why does it matter what people identify with, as long as they’re happy?

I know Leigh would be proud to be considered such a trail-blazer – he always wanted people to be different and was very interested in challenging perceptions of the human form.

Sue Tilley as drawn by her 8-year-old nephew, Reynard

You modelled for the artist Lucian Freud on numerous occasions, can you elaborate on what it was like to sit for him?

How important do you think the relationship between artist and human subject is in the creative process overall?

Lucian was very aware of the relationship between the artist and model – he really felt the model’s physical presence was vital to the overall composition.

I used to really enjoy sitting for him… it was very relaxing as you couldn’t do anything but pose in one position!

He was very keen on gossip and told me some great stories about celebrities such as Joan Collins, Cecil Beaton, Greta Garbo and Judy Garland!

Lucian had a wonderful sense of humour and would often make me laugh. He was a good cook too and would make me lunch or take me out somewhere fancy to eat, which I loved!

Alongside your work with Lucian Freud and colorful experiences at Taboo, you also used to work as a benefits supervisor, in Charing Cross. How did you find navigating such opposing realities and do you have any views on the recent spate of austerity cuts within the benefits sector, perhaps most notably to the arts?

I really like all the contrasting threads in my life, as I feel that they’ve given me a good, balanced view of things!

Working at Charing Cross wasn’t too bad, however I found the last few years of my career at DWP very depressing. I’d often end up crying with the customers, as their situations seemed so hopeless. I was thrilled when I was offered redundancy, as it meant I could finally get out!

I think the cuts to the arts have been terrible, but we also need to prioritise the NHS, charities and similar services for those who need it most – especially now with the current health crisis.

You moved to St Leonards in 2017 after many years in London and shortly after, you were diagnosed with breast cancer, from which you’ve since thankfully recovered. Did your background in the arts play any part in helping you through such dramatic life events?

I moved to St Leonards on a bit of a whim really – I had no plans to leave London, but decided to after visiting a friend here. I’d been here a few weeks when I met Tom Bartlett from The Sea Spray Gallery, who offered me an exhibition and a studio, which was amazing.

I discovered I had breast cancer a few months after I moved here. The staff at Carisbrooke Surgery, The Conquest and Maidstone Hospital were just amazing… so supportive and kind. I’m not sure if my background in the arts helped me through, although I think a positive attitude probably did. I try not to worry about things and just focus on making the most of every day.

I’m a huge fan of your virtual life drawing classes, which you’ve been running via Isolation Station for the duration of the current lockdown. What sort of response have you had from the community and what does it mean to you personally, to be able to help facilitate such a creative outlet for others?

I absolutely love running classes and used to hold them at The Fountain Pub, where my friend Wayne Shires is the landlord, prior to the lockdown. I was thrilled when Isolation Station, Hastings asked me to hold them online instead.

I modelled for the first one, but we’ve had other people modelling from home too – I had my friend from Lisbon this week so we’ve gone international now! Anyone can join in and we’ve had people from all over the world signing up to take part, as well as our regulars. People can send their sketches in at the end and we have a gallery on Facebook too, which is very popular.

Next week I’ve got London nightclub and fashion legend, Princess Julia modelling. We’ve been friends for over thirty years, so there should be some good chat and she’ll be brilliant to draw!

I also do a weekly online quiz via Isolation Station, which I used to run on a regular basis at The Cactus Hound. I love writing the questions and they often represent my own interest in modern culture and art.

From Sue Tilley’s art class at the Fountain Pub, Hastings

Why does it matter what people identify with, as long as they’re happy?

Having sat for one of the most highly regarded artists of the last century, which famous painting would you most like to feature in and why?

I’d have loved to have sat for any painting by Matisse – apparently he had a wardrobe of clothes for his models to dress up in! I actually told Lucian he should have one but he wasn’t too keen on the idea – he preferred his models nude! I often set up the models and backdrop for my art classes in the style of Matisse – lots of bright colours and flowers.

You’ve worn (and modelled!) many hats throughout the years, what’s next for Sue Tilley?

Who knows… I never really plan anything… opportunities just seem to come my way!

I have got one exciting thing in the pipeline, but I can’t really talk about it at the moment! I’m sure the world will be a different place once all of this is over, so we’ll have to just wait and see what happens won’t we?

• You can find out more about Sue Tilley’s online life drawing sessions and quiz session’s @isolation.station.hastings on Facebook. 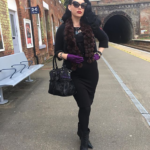 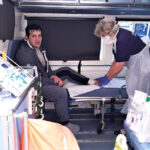