A Vehicle for Change?

Thatcher’s England in 1981 was in the grip of recession. Mass youth unemployment brought with it a sense of hopelessness and political disenfranchisement for young people. Racism and neo-nazism were increasingly prevalent and an angry post-punk generation of disaffected working class youngsters were venting their rage in a new sub-genre of punk; “Oi! music,” which was rooted in London’s east end.

Alarmed by the riots which swept the country that summer from Southall and Lambeth to Moss Side Manchester, dramatist Trevor Griffiths saw the urgent need to address racism and the rise of the far right movement and its attempts to exploit the frustrations of the young working class. His seminal play, Oi! for England was originally set in Moss Side, and first screened by the BBC in April 1982. It was then staged at The Royal Court Theatre, directed by the late, great Antonia Bird and featured Paul Moriarty, Peter Lovestrom, Paul McGann, Dorian Healy, Robin Hayter and Beverley Martin in its original cast.

The play centres on a group of naïve young skinheads who have formed a band and are approached by a shadowy figure, known only as ‘The Man’ who invites them to perform at a large scale event. This event turns out to be an extreme far right rally which prompts the band to question what they have in common with fascist movements.

The play toured youth clubs and community centres across London in 1982 in a bid to engage young people in the social and political issues of the day and to unite them against racism and fascism.

Griffiths wrote the lyrics to two of the four songs featured in the production, which members of the original cast also contributed to under musical director Andy Roberts. According to Griffiths these songs were designed “to light fires in the belly” of their young audiences.

Somewhat ironically, twenty eight years later, Robin Hayter, who played the band’s bassist Napper, found himself forced to reflect upon the parallels between the political, social and economic climate in England in the early 80s and that of the years 2010-11 and to wonder whether in fact, much had really changed since Oi! for England’s first performance. Hayter himself had just moved to Hastings from London, and was looking for work. Once again, Britain was in recession, feeling the pinch of austerity under a Conservative/Liberal Democrat coalition, and racism and far right movements were again rearing their ugly heads. The London riots of 2011 had demonstrated the undercurrents of anger from another disaffected generation of youngsters. These issues prompted Hayter –who had previously taught filmmaking at City and Islington College and whose acting credits include the television series Auf Wiedersehn Pet and BBC sci-fi series The Tripods – to ask whether the arts really can make a difference.  Spurred on by attending a lecture on crowd funding for independent filmmakers at The University of Brighton’s Havelock Road lecture hall in Hastings, he decided to make a film which looked back upon the making of Griffiths’ play and the issues it addressed.

The result is Oi! for England’s Green and Pleasant Land a documentary which focuses on a reunion of the play’s original cast, director, and writer, questioning what, if anything has really changed within society. It features interviews with Griffiths and actor Paul Moriarty about present-day politics asking whether theatre is an effective tool for change. It also boasts some of the only live footage of the groundbreaking director Antonia Bird –who died in 2013 but who is still the film’s posthumous executive producer.

“The original play was about the haves and have-nots in society. I’m asking what are we bequeathing to young people, is there hope for the future? When I first started making this film there was no Jeremy Corbyn, no alternative.”

It is clear that Hayter personally believes the arts can make a difference, so perhaps another irony is that the opportunity to begin and complete his documentary came largely from the facilities and assistance provided by The University of Brighton’s Hastings campus which is due to close at the end of this academic year.

“I’ve had a lot of support and inspiration from people. I’m fully into the arts and that’s why my heart bleeds when I see a place with decent facilities and fantastic staff being taken away. It’s a crying shame and an injustice that the arts are not being supported here.”

• The documentary will be entered for the Sheffield Documentary, Sundance, London, and Cannes film festivals and, taking its name from a Griffiths penned lyric is likely to cause audiences to reflect upon how far we’ve really come and where we are going to now:

• Oi! for England’s Green and Pleasant land There’s some that sit and some that stand. 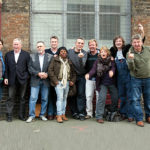