Calais Children – A Case To Answer

The refugee crisis in Calais has not gone away. Indeed destroying the ‘Jungle’ has arguably made the situation worse. Felicity Laurence of Hastings Supports Refugees reports on an extraordinary film to be shown at the Printworks which documents the abject failure of the British Government to help unaccompanied children.

At our January Hastings Debates, we heard directly from the founder of Care4Calais, Clare Moseley, about the current desperate situation on the ground for refugees in Calais. Professor Sue Clayton of Goldsmiths University concluded that talk with an introduction to her film Calais Children: A Case To Answer. On March 28th she returns to Hastings for a full screening of the film, with Q and A following. Since Sue Clayton’s visit in January, this film has been submitted as ‘cornerstone’ evidence to a High Court Judicial Review challenging the Home Office’s failure of legal duty to the young unaccompanied minors when the Calais ‘Jungle’ was demolished in October 2016.

We in Hastings Supports Refugees (HSR) had been sending large amounts of aid to refugees in Calais and further afield in Europe, and some of us had seen at first hand the suffering of the people in the ‘Jungle’. Knowing that it was to be destroyed, we wrote an open letter signed by prominent local people and the hundreds-strong membership of HSR, imploring our MP and Home Secretary Amber Rudd to ensure the safety and immediate processing of the 2,000 unaccompanied children identified by Sue Clayton and others, of whom many if not most had a legal right to be given entry here.

But this did not happen. While we and the world watched the ensuing chaos and violence of the Jungle’s destruction, Sue Clayton was there, in the middle of it all, filming it moment by moment, and crowdfunding through the night from the 400 donors who shared her commitment to recording as much as possible of what was actually taking place. The film records the events of those days, and follows up on what happened to some of the hundreds of abandoned children and young people over the following year, what they’ve had to go through, and the ongoing fight to get them to safety. The so-called ‘Dubs’ scheme for which the Government originally undertook to take in about 3,000 unaccompanied minors, a number subsequently cut by more than 80%, still seems to offer little help for these children. Sue’s recent comment on this lack of progress: “Of the 480 Dubs places that the Home Office has available for this scheme, they still have only filled 220 – and given the Act says ‘with all speed’ and ‘as soon as possible’ this is shameful.”

As we learn from the film, many unaccompanied children still languish in or near Calais, at high risk of trafficking and exploitation – some have indeed disappeared without trace. In telling their stories, the film aimed to be – in Sue’s own words – ‘the perfect balance between an empathetic account of them and their lives, and a razor-sharp indictment of the government’s position.’

Sue continues to fundraise for the young people in the film, providing ongoing help, and supporting a safe day-time refuge in Calais for young people.

The film is being shown all across the UK and Europe, with over 100 bookings so far, and will shortly be screened in Parliament, hosted by Lord Alf Dubs. Hastings Supports Refugees and Hastings Community of Sanctuary invite everyone to come and watch for themselves this award-winning and uniquely important film. Both legally and historically, it has become a key document of our times. 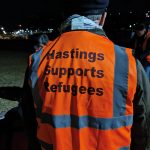 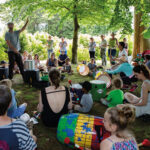