The Beast of Hastings – Aleister Crowley #1

‘The Wickedest Man in the World’, as the press called him, died in Hastings in 1947. There are people living locally who believe an aura of evil, his evil, lurks in the locations associated with him. Aleister Crowley was notorious as a traitor, a deviant, a ‘drug fiend’,  and as a man in league with the Devil. Many years ago, such matters were taken seriously.  So much so that Hastings Borough Council prohibited his cremation here. In life, Crowley played up to his image. Asked his name, he would confirm his diabolical reputation by replying ‘666’ or ‘The Beast’. In those days,‘The Beast’ meant ‘Satan’, not a weather system!

It is still believed that he hated the town and cursed its inhabitants so they could never free themselves from it: anyone who left would feel compelled to return. Crowley is said to have provided an opt-out. You could escape the curse by always carrying a pebble from Hastings beach in your pocket. The story is almost certainly a myth, as is another rumour circulating in the town; there is no evidence of him having furniture made of human skin.

The White Rock, the Ridge and the Occult
Crowley’s first experience of Hastings, aged 8, was at a school at White Rock. Beaten by the headmaster for insolence, he wished the old man dead, and so, when he died shortly afterwards, felt he had achieved his objective. Crowley’s last days were spent at Netherwood, a boarding house on the Ridge. Though drinking steadily and ingesting heroin, he was still mentally productive, writing there what was probably his
best book, ‘Magick in Theory and Practice’ and designing a set of Tarot cards still used today. Unsurprisingly, he occupied Room number 13.

Amongst Crowley’s extraordinary range of interests, the main one was the occult.
A magician, believed by some to be the supreme exponent of his age, he claimed to be able to affect the natural world through the agency of the spirits. This is where the Devil came in. Unlike his modern counterparts, Crowley used neither machinery nor mirrors, nor did he rely upon sleight of hand. His magic involved invocations to the spirits, sometimes animal sacrifices, and gave impressive results.

Crowley and the Devil
He seems to have been able to flood a space with light with no visible or identifiable source. This was achieved, he claimed, by subjugating the spirits to his will. Once they were subordinate, it was irrelevant whether they were were essentially good or bad. The Devil, being supremely powerful and bent to Crowley’s will, became a source of magical potency. Although Crowley rejected the idea that he worshiped the Devil, he did include an invocation to him in his book ‘Magick’. It is so eloquent that you can imagine Satan suddenly appearing  and putting his powers at Crowley’s disposal.

His Childhood
How did Crowley come to develop an attitude so much at variance
with the norms of his day and age? As so often, his childhood may provide an answer. At his schools, including the Hastings one, he was subjected to bullying and physical and emotional abuse. His parents were members of the Plymouth Brethren, a particularly puritanical sect. Even as a child,  he rebelled comprehensively against every idea with which he had been indoctrinated. One of the first ideas he rejected was the idea that the Devil was his enemy. He believed repression was the cause of evil, so the Devil could not be. Massive repression led to massive rebellion. Having experienced a joyless, inhibited, and perverted existence, he came to identify repression as the ultimate cause of the evils of the world. The solution was to cast all taboos aside, and to ignore all the  dogmas which could get in the way of fulfilling our desires. He lived a life of sex, drugs, and magic. He failed to invent rock n’roll but, as Meatloaf observed, “Two out of three ain’t bad.”

Even as a child, Crowley had a strong streak of cruelty. Told by his mother that cats had nine lives, he proceeded to poison one with arsenic, gassed it, stabbed it, smashed its skull, slit its throat, set light to it, drowned it and finally, dropped it from a high window. He proved his point. The cat died.

Pioneer for Drugs  and Sexuality
As an adult, his lifestyle ensured he was rarely out of the papers. When, prior to the First World War, drug regulation began, Crowley moved the opposite way. Anticipating the hippies, he held that drugs were a route to self-knowledge and enlightenment. His only novel, ‘Diary of a Drug Fiend’, was reviewed by the Sunday Express under the heading ‘A Book for Burning.’

His sexuality – he was publicly and unashamedly bisexual – led to his being labelled a ‘pervert’. Today, he could be viewed as a brave pioneer.

A Traitor?
If that was not enough, he was also regarded as a traitor to his country. He acquired this reputation early in his life. During the First World War, he went to live in America, then a neutral country. Both the German and Allied sides realised that, if America intervened in the war, its impact could be decisive. The German response was to set up propaganda publications in the U.S.. Crowley took a position as a writer on one of these, producing apparently pro-German propaganda, including lavish praise for the Kaiser. He went so far as to advocate an attack on the Cunard liner, the ‘Lusitania’.

The Lusitania was torpedoed by the Germans with the loss of 1198 lives, many of them American.

This act was a gift to an enemy of his, Horatio Bottomley, now seen as a disgraced figure. A supreme hypocrite, he had won admiration for a series of recruiting speeches
in Britain. Though exceptionally well paid for his trouble by the government, he took to embezzlement to enrich himself further. Fearing disgrace, he seized the opportunity to take the heat off himself by directing it at Crowley. His cry of ‘Traitor’ was taken up by the tabloid press. It did not save Bottomley but the mud stuck to Crowley.

Crowley had a defence but it was not accepted. He claimed to have been working for the British government, writing to order. In this light, his propaganda could be seen as satire and the Lusitania sinking as provocation to bring the Americans onto the allied side. Amazingly a long-hidden note in American secret services files has confirmed that he had been in the pay of the UK. You could argue that Crowley cynically produced what his German paymasters wanted from him but you could also claim that  the sinking of the Lusitania cost many lives but saved a million.

A Final Curse
Returning to his magical powers, he may not have cursed Hastings people in general but his last curse was announced in the town. As he lay dying, his doctor refused him the heroin he craved, for which Crowley cursed him. The day after Aleister Crowley’s death, his doctor was found dead in his bath. The death certificate read ‘Natural Causes’.

• In my next article about him, I will discuss other aspects of his life. He packed in so much that, unlike the cat, he had at least nine lives.

Aleister Crowley, The Wickedest Man in the World 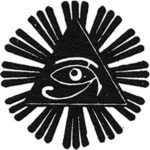