Action Man – Is he the kind of man you want to be?

Clement Boland, a former soldier, gives HIP extracts from his dissertation – part of a Designer/Maker course at Hastings College.

The idea of war as a competitive game, with overtones of manliness, fair play, rules, discipline, and clearly delineated teams, was certainly one which many of the 2.5 million volunteers carried with them to France in 1914 and 1915. It’s likely that this form of romanticised militarism will have been stoked by images of brightly coloured figures, armed with simple rifles, fighting face-to-face battles in which the casualties could be resurrected for further conflict. It would be sorely tested by four years of industrialised, impersonal slaughter on the Western Front, and again in the Second World War.

Airfix helps rewrite the narrative of war
The experience of war had been democratised by mass mobilisation and interest in military subjects expanded to the working class.  In the early 1950s, Airfix began producing affordable military figures en masse in plastic and at a smaller scale for this new market. Now children could create ambitious projects such as re-enactments of battles in which their fathers might actually have fought. Many veterans had returned to civilian life traumatised: toy soldiers could be used to create a more positive retelling of traumatic events. ‘In order really to forget an event, we must first summon up the strength to remember it properly.’ (Žižek). War films such as The Guns of Navarone had specific named play-sets linked to them. Such sets were injection-moulded in bright plastic and packaged with colourful box art in the style of movie posters and Commando Comics. Together these influences helped form the collective narrative of World War II as a time of shared national endeavour and evil successfully overcome. 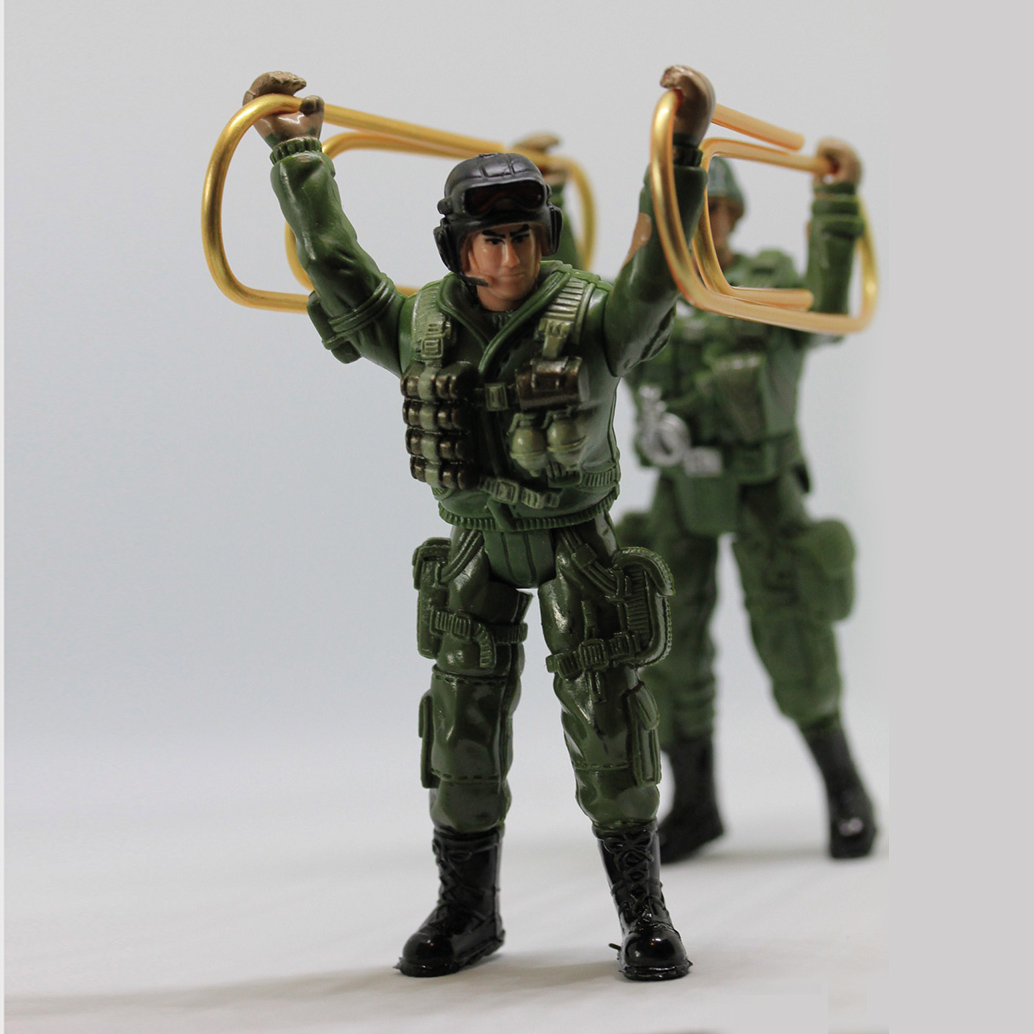 Action Man – those cartoonish good looks
Although the last conscript left the army in 1963, the toy soldier continued to play a role in recruitment by engaging young children in military-themed play. Adopting consumer marketing practice,  recruitment materials depicted war as a glorified, exciting challenge that leads to victory if only the appropriate costume is donned or the right button is pressed. To help convey this message, a closer relationship developed between the military and toy producers, exemplified by the Action Man figure which launched in 1966. Although manufactured and marketed by an independent producer, Palitoy, the toy was designed to represent British Military units. Cooperation with British Army regiments even resulted in military personnel accompanying the manufacturers to promotional toy fairs. The Action Man dolls differ from previous ranges in their larger size, detailed features, and flexibility, facilitating a variety of poses which all make it easier for the user to identify with the individual soldier: for the child to ‘become’ that soldier. The Action Man’s superhero physique and cartoonish good looks also increase their appeal. By introducing young children to attractive military characters that illustrate exciting and heroic stereotypes, these military toys instil admiration and respect for military culture.

Commercialisation of the Green Berets
In the US, during the Vietnam war, the industry devoted to the production of military toys in America became immense. It focused on one of the most aggressive military units of the time: the Green Berets. By the late 1960s, parents could buy Green Beret dolls, records, comic strips, bubble gum, puzzles and books for their children. For ten dollars, the Sears catalogue offered a Special Forces outpost, complete with machine guns, rifles, hand grenades, rockets, field telephone and plastic soldiers. Children played with Matty Mattel machine guns and grenades and miniature soldiers holding guns, bazookas and flamethrowers.  The US military recognised that it was crucial to ferment such fantasies if combat effectiveness was to remain high: the best combatants were young men who could visualise killing as pleasurable.

Cold War and Star Wars
In the late 1970s and 80s war toys took a notably futuristic turn. Space-age technology, interplanetary warfare and alien foes echoed the popularity of Star Wars: both the George Lucas blockbuster film franchise and Ronald Reagan’s nicknamed strategic defence initiative. The Cold War weaponisation of space and the associated fictional adventure tale undoubtedly fuelled the imaginations of children engaged in role play with Star Wars action figures. They were modelled on the old G.I. Joe figures, and proved to be one of the most successful toy lines ever, while Action Man developed Action Man the Space Ranger and his enemy Captain Zargon, Space Pirate.

The debacle of the Vietnam conflict contributed to a further increase in already strong anti-war feeling around the world and a downturn in the popularity of openly military-themed toys. However, the increased use of fantasy settings for the same themes of violence and warfare created new forms for the same ideas.

A new disguise, a stronger message
In the 21st century, with the demands of the War on Terror and problems retaining personnel, there are signs that direct marketing of the military to young people through their play has intensified again. Computer games, for example, now rival physical toys for children’s attention with titles like Call of Duty, Medal of Honour and Battlefield being huge commercial successes with multiple sequels. In both the US and UK, the military feature computer game elements as part of their recruitment drive. 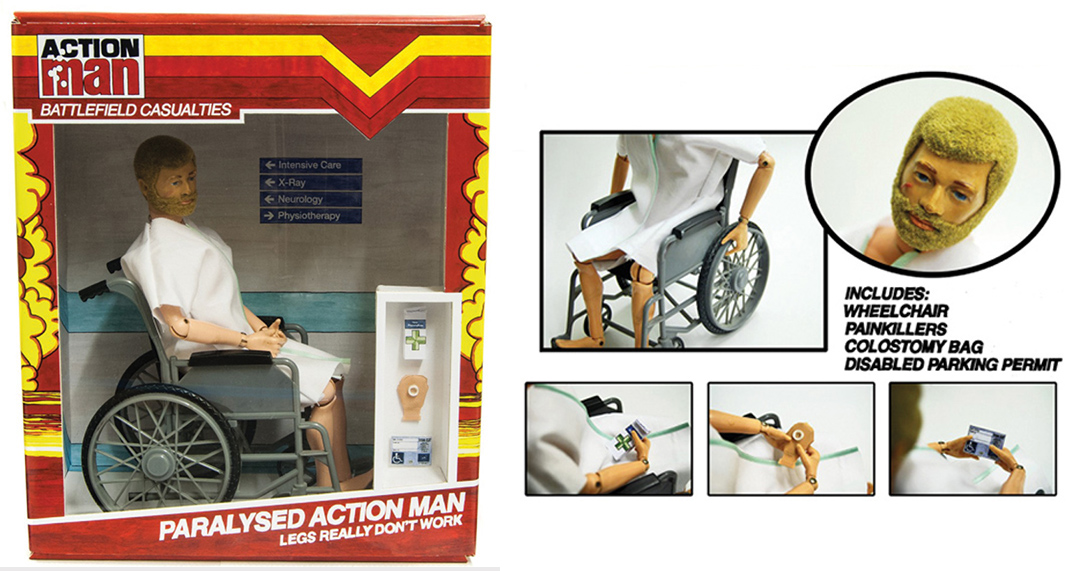 An overt relationship now exists between more traditional toy production, computer games and military recruitment in the UK. The British Army’s strategy states that effective recruitment relies on the inculcation of attitudes in young children, and official Armed Forces toys are being produced under license from the Ministry of Defence. Launched in 2009, a share of all profits go to the MOD and its related public relations activities.  The website for the toys states: ‘The primary aim is to raise the profile of the Armed Forces’ and that the toy line ‘harks back to the original Action Man figures’. The toys are aimed at children from the ages of five upwards and include the ‘character building’ series of mini figures, a Predator drone kit and a wide range of realistic weaponry. The government has also backed a Military Ethos in Schools programme.

In Britain it is demonstrable that the increased popularity and supply of toy soldiers played a potentially significant role in the jingoistic influences which supported the mass volunteer movement resulting in the slaughter on the Somme. However, the experience of two world wars changed the attitudes of citizens in their relationship with the state, authority and violence. Yet, by continuing to supply militaristic toys to children, even when veiled in fantasy settings, the idea is perpetuated that the state and authorities are entitled to their monopoly of violence and that in given circumstances it is right to slaughter or be slaughtered for its policies. Through its expansion, the toy soldier industry has helped create a situation where the concept of the professional soldier in service to the nation is taken as normality. In fact, it has taken huge amounts of both coercion and promotion to establish the concept.

• Clement Borland has also contributed to the current free show at the Science Museum – Wounded: Conflict, Casualties and Care. 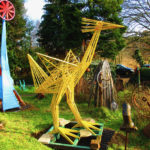 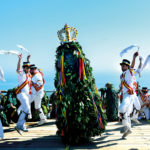 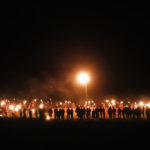