I am stumbling around my flat with my headphones on, pointing my iPad at a postcard. The cats don’t seem impressed, but they don’t know that what I am actually doing is time-travelling through local history, thanks to an innovative AR app called Apparitions. 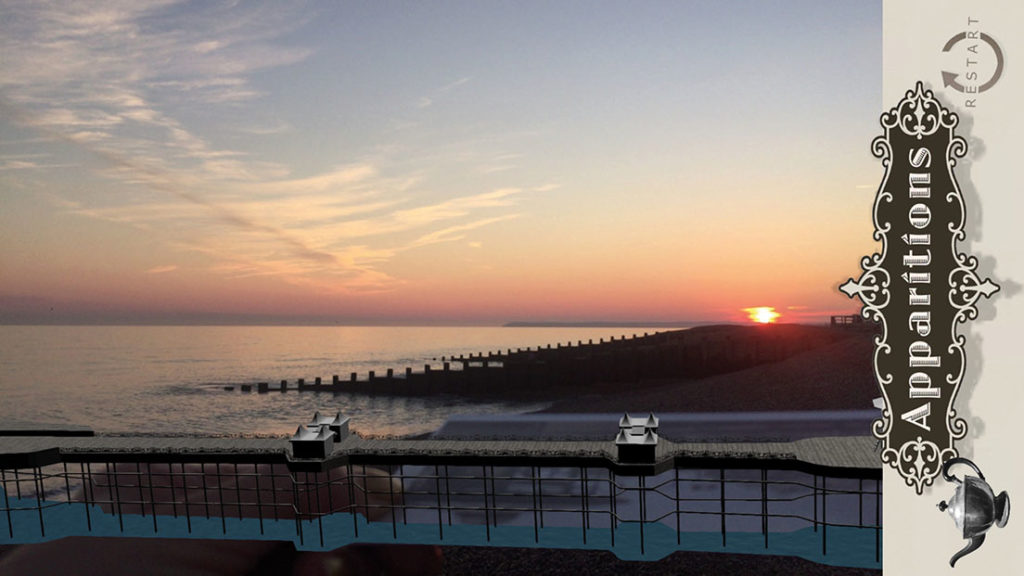 This ‘digital artwork’ is the brainchild of internationally-recognised digital artist Luciana Haill. Augmented Reality (AR) involves superimposing computer graphics on top of a live image. You point your device camera at something in the real world, the sorcery of ‘code’ triggers the graphics, and voilà, your view of reality is augmented.

In the case of the Apparitions app, AR enables users to interact with animated ghost-like 3D reconstructions of three ill-fated local landmarks: the Hastings Memorial Clock Tower, destroyed by arson in 1973; St Leonards Pier, demolished in 1951 after storm and fire damage; and the Bexhill beach huts, swept away by a storm in 1905.

To view the artworks, you first need to download the free app from http://www.apparitions.site. Then you actually have to leave the house, and hunt down the postcards which contain the code to trigger the graphics. They are available from a number of locations around Hastings and St Leonards.

And don’t forget your headphones, because the artworks contain specially created immersive soundscapes, and it’s these that really bring the experience to life. I love the collision between the newness of the technology and the eerie frisson of nostalgia evoked by the disembodied sounds of the past.

Now, I am no stranger to technology, but I was nevertheless grateful to have Luciana demonstrate the app to me in person. Luciana is artist-in-residence in the Department of Psychology at the University of Greenwich, breaking new ground in the unchartered area where art, technology and neurology come together.

After moving to Hastings in 2012, she fell in love with the history of the area and felt driven to create the app. “I am fascinated by the relationship of history, new technologies, memory and dreams. To me these augmented reality landmarks are like ghosts which Smartphones can allow us to see.”

As with all new technologies, a little patience is required, and the project wasn’t free from frustrations. The app is currently only available for Apple devices, though Luciana is seeking funding to develop an Android version.

And it was an unlikely casualty of the new GDPR regulations. The original intention was to use geolocation triggers (like Pokemon Go!) so the digital reconstructions would have appeared in their original locations. But the myriad legal implications of GDPR turned out to be prohibitive.

However, with a bit of jiggery-pokery, if you visit the original sites and position the trigger postcards correctly, you can use the screenshot feature of your device to take photos of the ‘apparitions’ as they may have appeared in their heyday. And this is what I love about the app: rather than encouraging us to escape into some virtual fantasy world, it prompts the user to interact with the history of their local area.

Luciana’s enthusiasm for the project is infectious, and she is always on the lookout for other ‘lost landmarks’ as the basis for new apparitions. Sadly, it looks increasingly likely that St Leonard’s parish church may one day be a candidate for the Apparitions treatment.

Of the three existing apparitions, the most personal and narrative-led work is Londoner Alan Clark’s true story of the Bexhill Beach Huts.

The only item to survive the storm that destroyed his family’s hut was a metal plated teapot, rescued bobbing about in the sea the next day.

Within the app, the teapot becomes an unlikely but quintessentially English symbol of survival and continuity. And you can see the real thing for yourself at Luciana’s event on the 10th November. 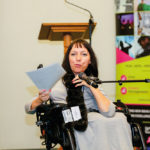