Situated on National Cycle Route 2 Hastings is a good place for cycling with a dedicated but shared use seafront path and a flat run west all the way to Bexhill and Eastbourne. For the more ambitious with a bike rack there’s plenty of nearby East Sussex cycling excursions: The Cuckoo trail, Bedgebury Pinetum and Romney Marsh.

I’ve had a bike for most of my life but of late – a mixture of age, injury and location means hills are getting harder. A bike ride becomes much less tempting when you know the final stage will involve a grinding slog up a steep slope.

Consequently I started to look into ebikes and initially considered a new purchase. With prices between £500 and £2,500+ (enough to buy a decent small used car) the choice is large with cursory research soon indicating it was likely to cost around a grand to get anything decent. Besides, I like my current Specialised Crosstrail hybrid (half ATB, half road bike).

It was. I chatted with owner Andy, who explained the logic behind their Bafang conversion and made the theoretical case. A trip out on their demonstrator followed and I was sold.

Put simply a conversion (assuming your existing frame is suitable, and if you take it in Andy can advise) consists of fitting a motor, battery pack, throttle, new chain set and LCD display plus a few related electronic and mechanical bits and bobs.

High Tide has done a few of these now and the system is tried and tested. The main decision is how big a battery pack you’ll need – and that’ll depend on how you use your bike. As with electric cars, owners’ biggest concerns are how far can I get and where might I recharge the battery?

Batteries lock into place on the frame and are removable for security and in-house charging (just a normal plug socket).

The mid-drive Bafang motor is fitted just in front of the chain wheel. The battery sits just above, on the diagonal bar, or on a rear carrier behind the saddle depending on frame type. Andy recommends the former location if possible in order to keep the centre of gravity low.

Conversion typically costs around £800 and adds 3-4 kilos to the bicycle’s weight and will alter the handling, but it’s amazing how quickly you adapt. The work on my bike took about 10 days (the components are ordered from China) and left me with seven rather than the 21 gears the cycle had originally. This isn’t a problem because there are three speed power settings on the electric motor.

Put to the test

My first run out to the Country Park on a muddy day was a tad over-ambitious – a combination of road tyres and torque steer resulting an undignified capsize. The next trip, to Bexhill, a revelation, despite a motorist who “didn’t see” a fluorescent red bike and red-jacket-clad rider two metres in front of him on a clear day…

Power assistance in setting one is a joy when riding into a typical sea front headwind – simply keep gently pedalling. Setting two, combined with a low gear ratio will take riders steadily up most local inclines (think of the long Cambridge/Bohemia Road climb out of town.) Setting three (and remember the highest power output uses the most electricity) is really only required on the longest and steepest hills. By law the motor’s top speed is limited to 25mph, although obviously that’s easily surpassed down hill when it’s switched off. Remember, you’re not converting a bicycle into an electric moped, rather giving those aching thigh muscles a break.

But I ride my bike for exercise, so isn’t this cheating? It’s true there’s less resistance and possibly not as much aerobic work involved, yet if the ‘e’ encourages you to use the bike more frequently and ride further afield that’s arguably a net gain.

Other makes and drive types are available so it’s well worth getting online – especially on bike forums – to check the pros and cons of different drive types. If you have a decent tool kit and are reasonably handy with technology there are plenty of conversion kits (including the Bafang) claiming they can be DIY fitted. 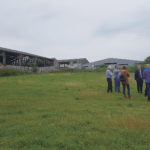