Basic Hygiene For Everyone

UK charity ‘The Hygiene Bank’ has launched a nationwide appeal for toiletries to help people who can’t afford basic hygiene.

Fourteen million people in the UK live below the poverty line. Four and a half million of these are children, two thirds of whom live in a family where at least one parent works, and 1.9 million are pensioners.

These figures are getting worse. As people are faced with the choice of buying food or hygiene products, food will take priority and 37% have had to go without hygiene or grooming essentials due to lack of funds.

Eight in ten primary school teachers have reported a rise in the numbers of children coming to school unwashed or not looking presentable and nearly half of teachers have seen bullying because of hygiene issues. Three out of ten teachers regularly buy their pupils toiletry essentials and one in ten girls in the UK can’t afford sanitary products and either improvise or miss school.

Kickstarting a campaign
The Hygiene Bank’s Kickstarter campaign aims to raise £8,000 to combat this problem and afford everyone their dignity.

The #ITSINTHEBAG campaign will see everyone who pledges at least £15 receive a branded duffle bag if the Kickstarter target is reached. By using this bag to collect donations of new, unused and in-date hygiene, beauty, grooming and personal care products, collecting and donating can become part of their everyday life.

Those who pledge £25 or more will also be able to nominate a school to receive a bag, ensuring that donations can be collected and hygiene-poverty tackled in one of the places where its effects are most keenly felt.

Kent-based charity founder Lizzy Hall, 49, launched The Hygiene Bank last August from her living room, initially sending a plea to friends on her phone using WhatsApp, asking for any unused and unwanted toiletries that she could package and send to her local food bank. 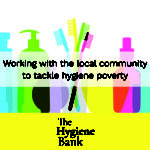