At the cold and wet fag-end of winter, what greater joy than to find a plate of comfort food?

Step up, Queens Deli, and its plates of proper corned beef hash. Home-cured beef is stirred together with nuggets of fried spud, kimchi – the fermented Korean pickle – and other bits and bobs. The regular meat version has now been joined by the vegan version (or the veggie if you add the standard egg) using spring onions, more of that kimchi and the meat replaced by deep-fried tofu to soak up the juices. Hashy heaven.

I’ve been enjoying the deli’s food and drink since it opened in November 2017 and wanted to discover what lies behind it all.

Owner Jez Smith grew up on a family pedigree beef cattle farm in Robertsbridge. After 20 years working in the City, including much world travel and eating (“I ate like a pig and drank like a fish”), he suddenly found himself taking over the farm after his father died. Experiments in curing, smoking and pie-making followed as he tried to make the most from their meat; he also developed a side-line in smoked salmon.  The farm was sold after his mother died and his farm-based skills and knowledge turned towards retail and the deli.

The foundation is the salt beef. Many come to the deli for its celebrated salt beef bagels and sandwiches (there’s a great cheese and kimchi toastie as well as the meat ones), plus other plates on a short and focused menu. It’s the off-cuts that gave rise to the hash; it’s also in homage to Jez’s Dad, who loved a plate of salt beef.

“It’s about craft and having the ability to create something different and unique,” explains Jez. What began as a business selling other people’s food, including cheese and charcuterie, has gradually gained its following because of what they make themselves. Queens Deli products include homemade sausages – I’ve never tasted better – and home-cured bacon, which are now on sale as well as going into the best of British breakfasts (available until 2pm). Black pudding is next on the development agenda – and the challenge of coming up with a top-grade vegan sausage.

Such craft requires attention to detail. The salt beef is made from brisket from properly aged meat and with a cure with their own evolved blend of nine spices. It took 18 months of daily tweaks to get it right. “It’s like anything,” says Jez. “If you play golf or do crochet every day, you get the opportunity to do it right.”

There are roots and knowledge here. Jez’s past work often took him to South Korea and he knew what he was after when they developed the kimchi. This tangy fermented pickle may be wildly fashionable, but here it has Seoul.

What greater joy than to find a plate of comfort food?

At heart, this well-travelled son-of-the-farm is reclaiming the quality and integrity of British meat traditions. “Salami and other charcuterie are almost like an occasional food,” Jez points out. “Where is its place within our diet? It’s picking at a few bits before dinner, not the main event. A banging breakfast is an event and the same with the hash. We want to be the headline, not the support act.”

Our love of porky-beefy-salty cured meats goes back centuries, rather than being the latest trend.  So it’s no surprise that people make their way to this part of town for the deli’s specialities.

Who comes here? “This is the bit I really love,” says Jez. “Everybody. There are people with no money who love their food who come here. Retired people, trades, solicitors, everyone and anyone.” At that, our conversation finishes as a class of schoolchildren come in for an inset day breakfast talk about food. Now that’s an education worth having. 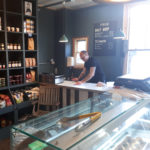 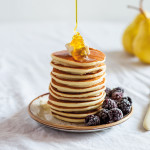 Vegan Hastings- Ahead of the curve by Georgie Drake