If Music Be The Food Of Love, I’m Out Of Luck

I haven’t got any musical talent and I don’t mind. Which reminds me of a programme I saw about overweight kids. They asked a girl whether she was concerned about her weight, and she said: “I don’t mind, it’s everyone else that seems to have a problem with it”. I liked her instantly, after that. I don’t mind not having any musical talent, it’s other people that can’t accept it, and want to unleash some undiscovered, non-existent gift. Apart from my family, who laugh at me and point.

The food of love. Yep, seamless. What is this remarkable edible fantasy? This “Voulez-vous couchez avec moi, petit pois” ? It’s probably not roll-mops and it’s probably not spicy dhal soup, so again I’m out of luck, but I have investigated and, sometimes, the way to a loved one’s heart, is through their stomach – just don’t employ the same rule, if you’re a surgeon. I read once, that Delia Smith learnt Cordon Bleu cooking to steal a man from the clutches of another woman, who could cook. That went well for her. I’m not promising that you could become an internationally – acclaimed, televised super chef, but you might pull Barry from H.E. Let’s find you some lurve food. (Artistic license gone mad).

So food and love, according to my 7 year old, is a bowl of spaghetti, which I would really avoid on a first date. It may have worked for Lady and the Tramp, but they didn’t show the bit when one you sucks up the spaghetti and the last bit splats the sauce on your face and top, or the bit when you have underestimated how much is accumulating and you have to bite your spaghetti off or greedily spoon it into your already full mouth. Plus, if you can’t eat spaghetti like that, there’s no fun in spaghetti. My child and I have had spaghetti eating competitions since she was about 4, to see how much you can get on your fork and, in turn, get in your mouth. If you are doing that with your partner, you are already in love.

Here is a great article about food and seduction, taken from the “Saucy Dressing” website, which is well worth a visit.

“I don’t know how I got hold of it, but a while ago a copy of Mimi Sheraton’s The Seducer’s Cookbook fell into my hands and I’ve been quietly chuckling my way through it since. It’s a truly delightful read, first published in 1964 (oh, the sixties!), and in the introduction Mrs Sheraton explains that:

“What we are concerned with here is the delectable and subtle art of luring, tempting, enticing, leading someone into going to bed with you in the most delightful way possible.”

One of the delights of seduction is that it is never quite sure who is seducing whom… Useful for both sexes, then. And just because you are ‘in a relationship’, as the internet would have you put it, why should this highly pleasurable art have to cease. On the contrary, shouldn’t one be striving constantly to hone one’s skills in this regard?

This is especially the case if you are female because, as Mrs Sheraton puts it (feminists, look away now):

“…even if a woman doesn’t want marriage, she does want a considerably longer affair than a man may require… mostly because she needs a man around for a lot of collateral reasons – going out to dinner and nightclubs, supporting her, changing fuses, fixing the hi-fi, and taking out the garbage. Therefore the spell she casts must be a memorable one, one that sets her apart from other women he may know and makes him come back for more. That is where the recipes come in”.

On the other hand, men also want to seduce, for reasons too obvious to mention, and food can be one of the principal weapons in their armoury – a prop which can set a short man a veritable head and shoulders above an unculinarily-savvy Goliath of a rival.

So to mark the date, I’m writing a post outlining the lessons to be learnt from this gently wise and useful handbook, adding in anything else helpful I might have picked up during the course of my own romantic sparring.

Regarding the essential role of the recipes, I was delighted to see that I had already done much of the footslogging. Many of the recipes…. or perhaps I should more accurately say, ‘course concepts’…. have already been fully covered on Saucy Dressings. (Look these up on the Saucy Dressings website)

Then there is a menu for the first meal in your campaign. The food should be the kind “he basically loves – meat and potatoes and apple pie, but with a difference”. We’re talking:

And there is also another meal: “any woman in search of a clincher should acquaint herself with the advantages of Sunday breakfast”. This might include:
• Grilled orange slices with brown sugar
• Scrambled eggs with caraway seeds
• Pan-fried ham, aromatic with ginger.

I can vouch for the scrambled eggs, as that is what I, successfully, tried myself.

The déjeuner sur l’herbe – Radishes are the thing
Then there is The Déjeuner sur L’Herbe – the romantic picnic. In my own experience great care needs to be taken regarding the location. Dangers lurk both in the forms of curious dogs and small children, as well as in other types of wildlife, such as ant hills, nettle bushes, etc.

Mrs Sheraton advises wine to accompany this meal, “and just this once, please, for Cupid’s sake, carry stemmed wine glasses instead of paper cups”.

The menu for this situation is advisedly simple: potted lobster, sliced smoked tongue, cucumber sandwiches on pumpernickel with dill butter, chèvre… but I would combine the suggested marinated mushrooms and breast of chicken into a sublime ballottine.

I’m wholly with the radishes with butter, though. An excellent suggestion, albeit dependent on the quality of the ingredients for success. Try French Breakfast radishes, which have crisp, crunchy, cylindrical roots and a strong, peppery flavour. Take a sharp knife, and cut in chilled unsalted French butter (or Kerrygold is very good). Adorn with some textured sea or rock salt – Maldon for example.

Adventures on the sea – Take herb-buttered french bread
Chapter Eight covers the romantic potential of a maritime excursion (more aimed at gents, this chapter). “You want a girl”, advises Mrs Sheraton, “who already has a good coat of suntan, else she’ll be swaddled in yard goods or slippery with cocoa butter to keep from frying on the open sea, neither of which suits your purposes too well.”

There is a whole post to come warning against the dangers of cabbage in the galley, and advocating watermelon. But the menu in the handbook is simple: iced lobster, white grapes, champagne… and herb-buttered French bread. The suggested herbs are parsley, chervil, dill and thyme, but you could also experiment with a whole range of flavoured butters a whole range of flavoured butters.

Then there is the ploy
Mrs Sheraton explains that she discovered this effective strategy entirely by accident. Having invited her man over intending to impress him, the entire meal was ruined by a breathtakingly unlikely mix of breakages and burning. Her suitor strides into the breach, becomes the hero of the hour, producing, with a flourish and some modest murmurings, a pasta anointed with an oil and garlic sauce (post to come). “Funny thing was, this man
was so swept away by his own masculine ability that he proposed that very night out of sheer self-satisfaction.”

I’m not wholly convinced about Mrs Sheraton’s (or Miriam Solomon’s, as she was then) psychology on this one. An alternative theory is that
her man may just have seen the frighteningly intelligent, capable, and elegant beauty that she’d been up to then as a loveable mortal, capable of endearing mistakes.

But you are looking for a result, so either way this is a ploy worth employing. Every man ought to be able to fix a conveniently easily curdled hollandaise sauce for example. Otherwise, try something that needs to be set alight, most men are suffused with instinctive confidence when it comes to fire, there’s something neanderthal about the whole process.” 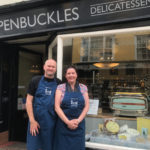 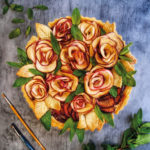 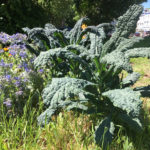