By Tessa Boase and Hattie Ellis

Home Ground Kitchen had been open for just over six months before Lockdown hit, but in this short time, the community food venue with a big soul had already acquired a fanatically loyal customer base. Covid-19 has been truly testing, but a series of creative pivots have proved HGK’s core mission of providing good food for both body and soul.

First, the venue. The café’s plate glass doors give onto a surreal vista of technicolour graffiti, fire escapes and Victorian brickwork. It’s in a thrillingly edgy setting, tucked down a dank alleyway between the library and Rock House. “People love it,” says co-founder Savannah. “They think they’re in New York.” A gate at the entrance to the alley by local metalworker Leigh Dyer is to be followed by a giant frying pan to signpost the kitchen’s presence.

Inside, all is space and straight lines, with a boho-industrial vibe. Large, communal tables represent Savannah Karr and Kate Rintoul’s belief that “food is about how you eat, not just what you eat. The simple pleasure of eating communally gives you greater health.”

With Covid restrictions, the venue now makes use of its atmospheric outdoor space by providing socially distanced tables outside, as well a high-ceilinged, roomy indoor venue that can seat 25 spaciously.

Home Ground’s cuisine is eclectic, global and well-priced. The original focus on lunch has shifted to flexible all-day eating, from 12 noon – 9pm, with small plates and bowl food, each month focusing on a different cuisine. The cooking is done by Savannah and Kate with a small female team and reflects their love and respect for the different cuisines they showcase. “Our customers say they get an adventure when they come and try things they wouldn’t necessarily get down here,” says Savannah.

As well as craft coffee and tea, they’ve teamed up with baker Victoria Made to provide cakes inspired by different ingredients, such as rose, pistachio and pink peppercorn cake, and then cocktails that include the flavours of the food on the plate – a Chai Old-fashioned, a Sumac Martini, a Morocoto (Moroccan mojito) – and wines expertly curated by Stephanie Goj of Graze-on-Grand.

Supper clubs are another way of bringing people together to eat; look for Facebook and Instagram updates. These can be hosted by chefs who hire the space, including a new Wednesday ramen pop-up.

HGK is also continuing to sell online for Friday and Saturday pick-up and delivery done by zero-emissions, pedal-powered Hastings Cargo. This strand was developed through necessity in Lockdown, when they decided to keep cooking rather than going on furlough. “Savannah and I both felt we didn’t want to shut the doors after six months not knowing when we’d open again,” says Kate. “It was good for us and kept us in touch with customers. We learnt a lot from it and have ended up with more confidence.”

What sets Home Ground apart, whatever the circumstances in the world beyond, is its inspiring community ethos. Savannah and Kate aren’t in it for the money. They want the venue to operate as a classroom, a platform for food makers, and as a neighbourhood kitchen. “I’ve lived here for 20 years,” says Savannah, 38. “I know and love this town. I’m into keeping it real. There’s a fine balance between gentrification and genuine improvement.”

Both having run cookery classes for the past five years, the pair knew there was an appetite for a new approach to healthy eating. “You’d be surprised at how many people actually do want to learn to cook,” says Savannah, who teaches adult groups through her community programme Bags of Taste. “You should never dumb down the food.”

They want the the venue to operate as a neighbourhood kitchen

Kate, 33, is founder of Make Food UK, which runs holiday clubs based around food and community. “Some of the barriers facing people on lower incomes include a lack of equipment,” she points out. “Some have just a small hob or microwave to cook on.” There’s also a belief that ready-made meals are cheaper, but this isn’t necessarily true.  “Learning to cook can have such a positive, life-changing effect,’ says Kate, ‘building confidence and happiness at home.”

Korean food to eat in or take out

COOKING OPPORTUNITIES FOR ALL

The Kitchen was in part funded by the Chalk Cliff Fund, an advance from Heart of Hastings, and Crowdfunding. In one month local backers raised £3,600. As a registered Community Interest Company, it aims to provide cooking opportunities for diverse groups.

• Training for aspiring young female chefs
• Women’s Voice workshops; everybody brings a dish
• Cooking skill-share with refugees
• Community party or meeting venue with in-house catering: there’s even a film projector, donated by the Electric Palace
• Surplus-food supper clubs where people pay what they can
• External catering opportunities for the team and for others looking to get started in the industry
• Upcoming outdoor barista school
• ‘CookShop’ school sessions, working with local young people and children. In these restricted times, they’ve helped young people to produce cook-along videos on TicToc

Home Ground is also available for corporate hire and office parties. Last Christmas, one such memorable event was the St Richard’s staff Christmas lunch. “The teachers were like locusts,” laughs Savannah. “They devoured the food, and they were such fun. They put me in a hugely good mood for the rest of the week.”

There’s clearly something about that surrounding Gotham vibe that makes you feel you’re entering a portal to another world. Savannah points out that America Ground has always been a place apart. Once sitting just outside Hastings Council’s official boundary, by the early 19th-century it was effectively a no man’s land: a thriving, independent colony of stone masons, rope makers and lime kilns, with a slaughter house, sawing mill, tallow factory and gin palace. That sense of proud independence is just as strong today – and despite interest from developers, America Ground has managed to retain its slightly edgy, no man’s land vibe.

Home Ground Kitchen feels like a natural fit. And given its hidden location, the project’s early success is entirely down to word of mouth and social media. “If you build it,” says Savannah, “they will come.” 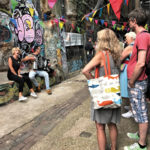 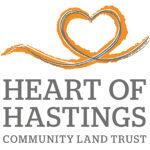 Opportunity To Engage With The Community 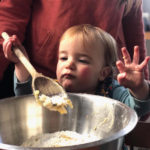