An independent greengrocers shines bright amidst a run of take-aways and supermarkets on the Old London Road in Ore. Formerly Carrolls, it has just been bought by its manager Mike Stanbridge and renamed Good on Greens. Its comings-and-goings show the benefits of having – and supporting – a good local food shop.

Like the best shops, Good on Greens manages to cram an astonishing range of stock into a small space whilst giving everything room to sing.

The regular produce is well done and varied.  There aren’t just several kinds of spuds; you can choose between ‘dirty’ reds for 60p per kilo or washed for 80p.  Abundant seasonal fruit is as local as possible. Alongside is plenty of what greengrocers used to call ‘queer gear’: pak choi, beansprouts, smoked French garlic, turmeric root, Scotch bonnet chillies, acorn squash. Next year the shop will get supplies from organic growers Stonelynk from down the road in Fairlight.

“Some people want fancy lettuces, their radicchios and lollo rossos and oak leaf, because they’re trying to do something really colourful,” says Mike. “Then you’ve got Mr Jones who wants a simple iceberg lettuce because he wants a bit in his sandwich or burger. We try to keep a little bit of something for everyone. It gives people a choice from the supermarkets: it’s fresh and it’s daily and it’s part of the community.”

This display takes Mike 1 ½ hours to put up every day; it’s all about getting produce at the right height and right place to catch the eye. Everything is then put carefully back in the chiller at the end of the day.

Prices are competitive. It’s a myth that supermarkets are always cheaper than small shops. Six Granny Smith apples are currently around 25p each in a bag of six in Tesco and Sainsbury’s and 20p at Good on Greens. And you can buy a single one of anything you want, not a plastic bagful.

A big focus for Mike in his revamped shop is to get rid of as much plastic as possible, a move also done by Old Town greengrocers Hill & Coulter. Supermarkets argue that plastic saves waste, but this is down to bulk buying and long-supply chains that require extra shelf-life. He keeps his stock flowing and only keeps goods in plastic when strictly necessary, for example some salads.

Sturdy paper bags are on sale at Good on Greens for 20p if needed and Mike has ordered easy-to-carry crates that can contain the produce in the kitchen and then be re-used for shopping.

Cutting down on waste has long been a priority. Canny shoppers and preservers can go to the shop to buy cheap grade-two produce for smoothies, jams and chutneys. Trimmings from cabbages, slightly damaged apples and other unsellable but edible goods go to a local pig farmer.

Future plans include selling pulses, nuts and dry goods from free-flow dispensers, again avoiding plastic, and recipe cards to give ideas for the likes of butternut squash and cavolo nero.

Mike lives in St Leonards and came to the area nearly 25 years ago and has been in sales all his life. He began driving for Carrolls in 2016 and soon began managing their store. For the first three months he stood outside and made a point of saying “Hello” to everyone. At first it was met with silence – people are wary of change – but persistence and friendliness paid off.

A steady stream of shoppers now arrives, each with their own needs. As we stand talking, one woman orders a box of fruit to be delivered to her mother’s care home. Mike offers a French customer a choice of red or green chicory. Another man gets what he needs for supper – he comes in three or four times a week. Gill from Clyde Vale tells me she’s delighted about the plastics policy. She used to return plastic wrapping to the managers in protest when she shopped in a supermarket. Many customers are glad the shop now takes card payment not just cash.

Another line of custom comes from owners of animals big and small. Seeds and feed are sold for birds and small pets while horse owners come in for parsnips, turnips and ‘horsey apples’. One regular gets two extra-large bunches of flat leaf parsley every week. “Her equine vet told her you couldn’t give anything better for the horse’s blood,” says Mike. The herbs are now kept fresh in containers of water, not plastic bags.

Mike will deliver locally for £1, which helps older people in this hilly area, and he delivers Christmas veg boxes for free (see below). The local Sandown Primary School gets its fruit from the shop.

“If you want to become part of a small community, you have to show that you’re there to help them and support them,” says Mike. “And if you show people you’re willing and honest and give a good service, they will give back to you.”

Fruit and veg are heavy, especially when you’re feeding a family and friends. A delivery, or picking up a ready-packed box, is one way to take the hassle out of Christmas holiday food shopping, as well as supporting a local business.

Demand for Mike’s Christmas veg and fruit boxes has grown from 19 when they started three years ago to more than 100 this year. You can pick up an order form from the shop and he will deliver free-of-charge up until 23rd December, with shop pick-ups until 24th December. 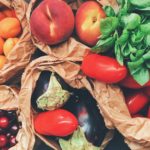 How green are our greengrocers?