Celebrating Life With The Silver Darlings

Hastings fishmonger Tush Hamilton, 77, talks about the past and present of the under-rated herring. He and his wife Pat will be at Hastings’ eighth Herring Fair (23rd & 24th November, 11am-4pm, Stade Open Space, free entry) along with other displays, food and drink, cookery demos, music and children’s activities.

Rock-a-Nore Fisheries – kippers on sale at the Herring Fair

All I’m telling you is what I know – not what I’ve heard or read in books.

Herrings were a big part of Hastings in the 50s and 60s. It’s a very short season – starts at the end of October and lasts until around Christmas. The shoal is lower down and you don’t see it like the mackerel, but fishermen have ideas of where they are.

There used to be 12 to 15 boats out herring catching. The boats would leave Hastings at 3 o’clock in the afternoon and they’d berth so many hundred yards apart, all the way down to Pett and about half a mile out, where they thought the herrings were. They used drift nets, about 20 nets for each boat. There they were, all in a line, and they drifted until it became nearly dark.

On the first star in the sky, just before it’s dark, we’d pull in the first net, about 40-50 yards long, and shake the herrings out into the boat and count them, then put that net back over. The next time you’d pull them in was when it was completely dark, shake them out and count again. The first pull-in might be 20 herrings, the next 30 or 40. We’d leave it another half an hour, pull it in again and there might be only four or five. Then they’d get the whole fleet in. The swim was over. By 9 or 10 o’clock that night, all the boats would be back on the beach.

It wasn’t unusual for each boat to catch 50-100 stone [317-635kg]. Some went back out at high water in the early morning too. They thought the best time to catch them was at the change of light – ‘twixt the lights’ – in the evening, 3-4pm, and when it’s going from dawn to daylight – ‘the dawning’.

In 1967 my wife Pat and I bought the oldest fish shop in Hastings, opposite the church [now the hat shop]. The shop was very well known for kippers and bloaters, which are cold-smoked herring with the guts in. We were young – I was 26 – and hadn’t long been married and we did thousands in that six week period. We worked day and night – we couldn’t keep up with it. Sometimes I didn’t go to bed. My missus would get out of bed many times at 3 o’clock in the morning to turn them round. We’d go to parties and stop on the way back to turn the herrings. We’d get through as much as 200 stone [1270kg] a week of fresh and smoked herrings. People would buy a dozen bloaters at a time because they had a good shelf-life.

Everyone ate herrings in those days. As a kid, I used to walk down All Saints Street at tea-time and all you could smell was herrings cooking. My father used to cook bloaters on the fire, much to the upset of my mum, who had to clean the fat off the grate.

Then there was a complete ban on catching herrings all around the coast. And people forgot about them. That started the decline and it never picked up.

We had this idea to try to promote herrings and at first we were just outside on the Stade on a stall for two years, showing how simple they were to cook.

At the Herring Fair, I show people how to prepare, cook and eat a herring. In the next few weeks they are best, full of roe and in perfect condition. I like to cook them whole with the roe inside with a little bit of oil and a little bit of flour to get them nice and brown – but you don’t need anything as they cook in their own oil. They take just 3 or 4 minutes, turning them over every minute or so. They’re cheap, they’re nutritious. People should eat them and they should try them – beautiful. 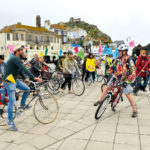