In his best-selling book Outliers American author Malcolm Gladwell promoted an arresting thesis. Prodigious performances, he declared, whether in the arts or in sciences in any other spheres of human activity in which they can be documented, do not stem primarily from innate “genius”of the performer; they are the outcome of repetitive practice – a lot of it, typically around 10,000 hours.

Exemplars in his book include Bill Gates, who spent his teenage years messing around day and night with primitive high school computers; the Beatles, who before they hit the international pop charts spent several years playing long sessions in clubs in Hamburg; and a sample of elite chess players. “Achievement”, Gladwell concluded, “is talent plus preparation……The closer psychologists look at the careers of the gifted, the smaller the role innate talent seems to play and the bigger the role preparation seems to play.”

Does this apply to sport too? A more recent study in 2013 by David Epstein, The Sports Gene, investigated further the respective contributions of nature and nurture to excellence in sport: is it genes or training? He referred to a Bahamian high-jumper Donald Thomas who won the World Championship event in 2007 after only a few months rudimentary practice in the sport; and observed that if you don’t run fast to start with, no amount of training is going to transform you into a sprint athlete. In darts, too, top performers can emerge without a long apprenticeship.

Gladwell wrote an unabashed rejoinder in the New Yorker. “In cognitively demanding fields, there are no naturals”, he maintained. “In instances where there are not a long list of situations and scenarios and possibilities to master —like jumping really high, running as fast as you can in a straight line, or directing a sharp object at a large, round piece of cork—expertise can be attained a whole lot more quickly”.

Tennis looks a simple game from the outside: a racket, a ball and an area of court to hit it into. But there is no doubt that the British LTA are on Gladwell’s side of the net as far as development of juniors is concerned. In order to develop aptitude you need access to good courts and experienced coaches. And you get that access by competing for ratings (based on accumulation of victories in individual matches against similar standard opponents) and rankings (accumulation of points scored from performances in qualifying tournaments). The more you compete, the faster upwards you’ll move.

At 14 Olivia Stapley is the leading junior in Hastings tennis. Her father Mark was a County League footballer; neither he nor her mother Doreen play tennis to any standard. She says that she herself wasn’t good at sports at an early age – “I was a chubby kid”. But Clare Larkin, sister of senior champion Frances Candy (see HIP issue 28), offered some tennis classes to children at Little Ridge primary school when she was just five. Clare noticed her talent – or maybe her determination to practise and improve – and started giving her lessons on the public courts of Alexandra Park. Soon she was joining The Green club in St Leonards for group sessions, then hitting with the boys at Frances’ club in Rye (“until I started beating them”), then upgrading to the David Lloyd Centre in Eastbourne overseen by Tim Henman’s former coach Clay Iles. One or other of her parents would drive her there from Hastings for evening sessions with him twice a week. Her present regime includes training sessions with Amherst coaches twice a week, hitting with Clare’s daughter Suzy, also a former County player, on other weekdays, and playing tournaments or matches virtually every weekend around the southern counties with a view to climbing the national rankings.

That sounds a very high and sustained level of dedication. But at an average of, say, 12 hours play per week for 50 weeks per year it would take nearly 17 years for Olivia to post 10,000 hours on her tennis clock. Other players up and down the country are getting there faster. While she adheres to the general curriculum of studies in secondary school at Claverham (and is in top academic sets), many of her age or younger are home-schooled or else attend specialised tennis academies which allow them to be on court most of the day. The competition is remorseless.

I watch her on a Tuesday afternoon beginning a session at Amherst with coach Doug Keen. She comes out with immediate focus and drive, flaying his approach shots to the corners of the court – one of those players who seem determined to win the warm-up, let alone any subsequent contest.

“She is a very focused and determined player”, Doug tells me. “She may not be destined for a pro career. But she’s on track to compete at least for a tennis scholarship at college in the US”. Because there are fewer sports at which women compete in this arena there are significantly more such scholarships available for female than male players. If obtained, that would mean getting a four-year university education paid for – quite an incentive now with the rise in English tuition fees – and Olivia is, albeit some years in advance, keen on the idea.

Fellow Amherst junior Hayden Hoxey (“Haydos” to all his friends after the Australian cricketer Matthew Hayden) is just ten. He only picked up a racket around three years ago after walking through the local park at Amherst with his grandfather. Neither of his parents play tennis at all, nor claim any sporting antecedents. However on joining the group sessions run by the club for beginners he showed immediate talent, hitting cleanly and consistently with natural ball sense, and has moved rapidly up through the ranks to join the senior academy, normally reserved for age eleven upwards. With no disrespect to other children there, he obviously has a special gift. “He has great co-ordination and court sense”, says Doug. “And an X-factor: he’s determined to win the point and he’ll find a way”.

He already plays upwards of ten hours per week. He broke his right wrist a few months ago, which was expected to put him out of the game for several months. But no, he was back almost immediately playing left-handed with considerable aplomb.

The club is encouraging Haydos to enter tournaments this summer which may doom his parents, like Olivia’s, to evenings and weekends of chauffeuring, spectating, hanging about – the treadmill of sporting parenthood. Are they up for it? Time will tell. But Haydos has a T-shirt (getting too small to be worn now) reading “Eat Sleep Tennis Repeat”. He must have got it from somebody close to home. 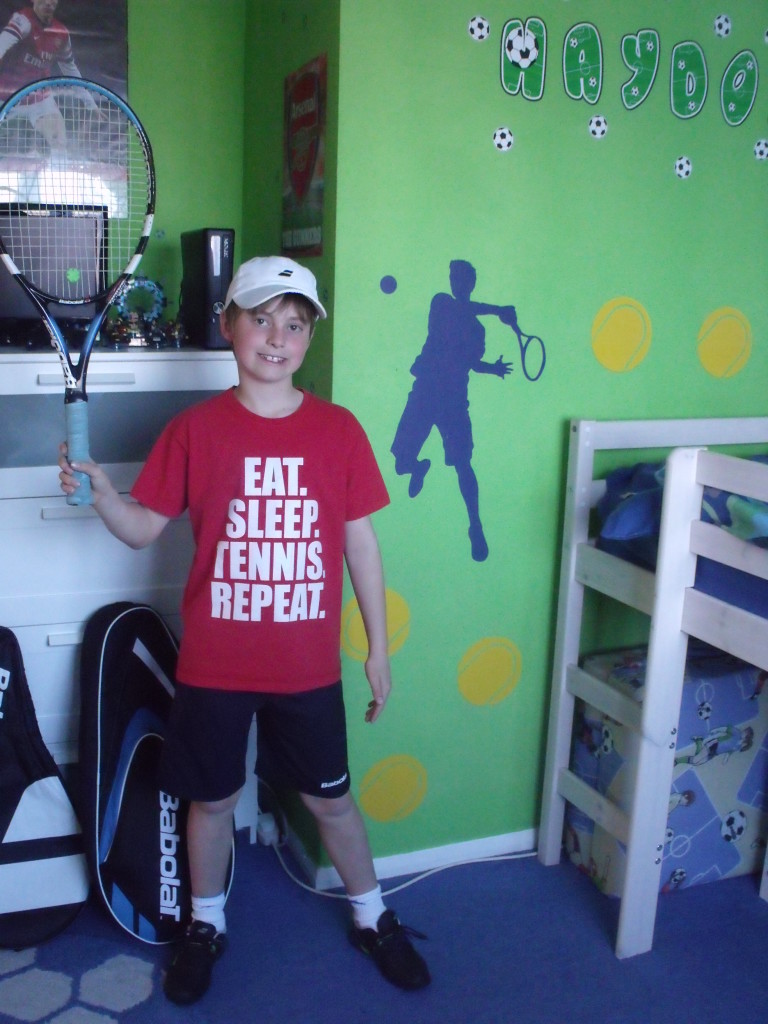 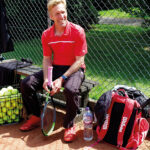