United in the Community 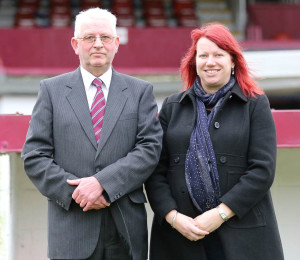 The relationship between local professional football club and local council is not always easy. In February 2015 we ran a feature article highlighting differences between the Hastings United club and Hastings Council. The United chairman of the time, Dave Walters, was highly critical of the Council’s failure to recognise the achievements of the club and to support it in its ideas of developing a new sports complex. The Council’s lead member for regeneration, Dawn Poole, insisted on the contrary that they were willing to help the club but that they could not take sole responsibility for funding or land provision.

Twelve months on, with Ms Poole still representing the Council but United under substantially changed management, there seems to be a much more harmonious relationship. There is no longer talk of leaving Pilot Field. Last month current club chairman Dave Ormerod and Ms Poole together launched a new combined project, Hastings United in the Community, aimed at attracting youths (of both sexes) to get involved in footballing activities directed by the club.

The project will set up school holiday programmes and six-a-side competitions across the town. FA-qualified coaches will be made available not only to young footballers but also to those who want to learn coaching skills themselves. On the other hand the club will also aim to attract a keener local focus on itself by offering match day experiences to young players, including meeting the professional players, watching games and, when conditions and availability allow, performing on the excellently maintained Pilot Field pitch.

In a joint press release Ms Poole stated – “The aim of the project is to get young people active and back into grassroots football in a fun way”. Mr Ormerod backed her – “The project is a positive stepping stone for the club in its desire to build closer and more positive links with Hastings Council and the community in general”.