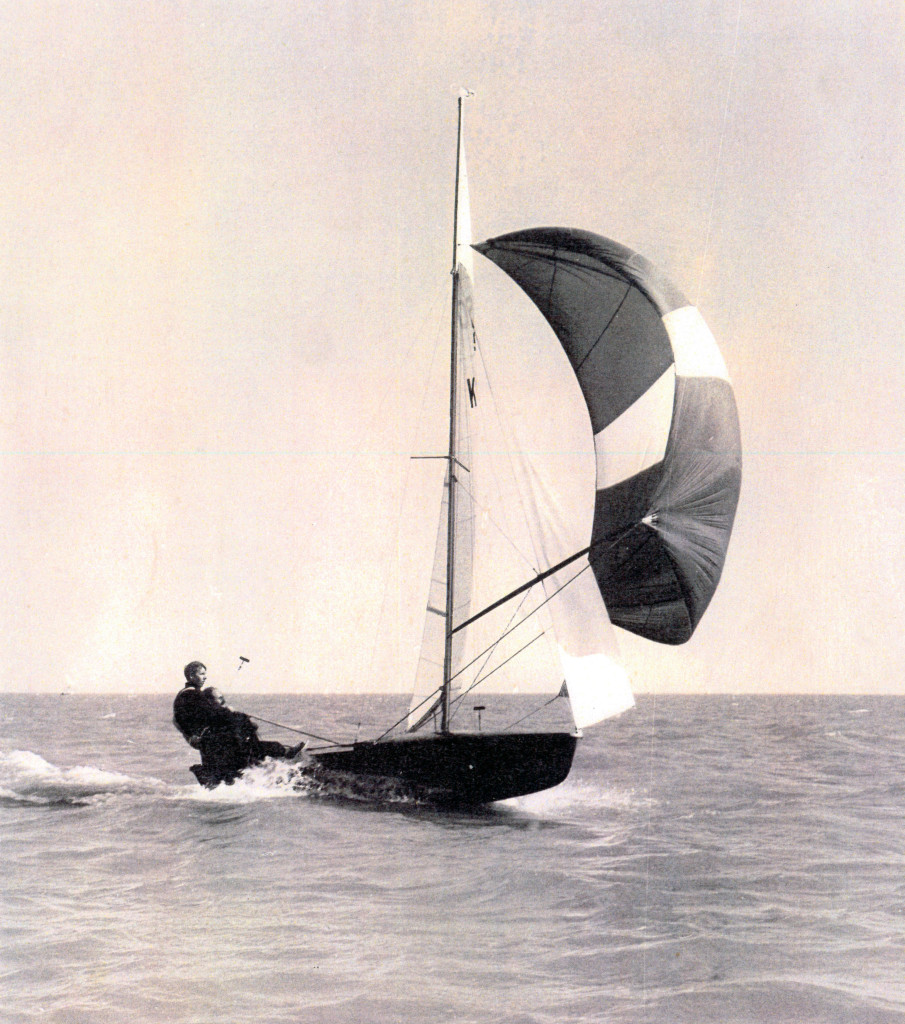 Don Bowles is sitting in the open veranda of the Hastings & St Leonards Sailing clubhouse, walkie-talkie in hand, looking out onto the beach where an array of dinghies is being launched for the morning’s training session. He has been a member here for 56 years. At the age of 82 with a replaced knee his active sailing days are over; but he still presides over the club as Commodore (his second stint in the role) – and here he is on a fine Saturday morning radio-ing messages to and from the instructor on the patrol boat out on the water. Making dinghies, racing them and teaching others to sail has been his life.

From childhood in Bexhill where his parents ran a guest house Don was early into the sport. And since he couldn’t afford in his youth to buy boats he built them – first a GP14 dinghy (General Purpose, 14 feet long) from scratch using facilities at the handicrafts college he was studying at, then a Merlin Rocket for which the constituent parts could be purchased in kit form and assembled in his parents’ front room.

The Hastings & St Leonards club first attracted Don’s attention when he found that they had dedicated races for Merlin Rockets – besides the fact that his future wife Ann was a Hastings lass and willing to be co-opted as second member of the Bowles team on all fronts.

The couple didn’t merely race every weekend. They raced in different places on the same day: 7 a.m. in Bexhill, 10 at St Leonards (where boats could be launched at lower tides), the afternoon at Pevensey. Or, since Don was first at college in London, then got a job there as crafts teacher at Highgate School, Ann would take an early morning train up to London and they would go out to Aldenham Reservoir for a day’s sport on the water. Conditions there were spartan: no electricity, no running water, just a basic hut for changing in, no matter what the weather. Don remembers cotton sails that froze in winter, and the fizzing sound of thin ice cracking as the boat cut through it.

“We were married ten years before we had a Sunday lunch”, Don tells me. The wedding was celebrated on a Monday, with the most treasured wedding present a rare victory the previous day in a regatta at Eastbourne over Don’s celebrated rival Derek Farrant, who had been TT motorcycle champion on the Isle of Man as well as a highly competitive sailor. And the honeymoon? Towing the GP 14 to Anglesey to compete in the National Championships followed by another sailing week at Poole.

Don continued to combine sailing with boat-building and graduated to a series of 505 dinghies (5.05 metres in length or 16 feet 6 inches) for competition in international class races. He would buy the plastic shell and standard aluminium mast but make and fit himself the centreboard, foredeck, side decks and other fittings, race the finished boat for a couple of years, then sell it to cover most of the cost of a new shell. The 505s, unlike Merlin Rockets, were raced with trapezes, Ann dangling acrobatically high and wide above the waves – “she was a high jumper”, Don says by way of explanation. They would compete regularly at La Rochelle, went on one occasion to a series of races in the USA, and came tenth in the world championship held at Tangier in 1965 (Derek Farrant and his brother Robin won it). Ann was the only female competitor there, and won the nickname of “the African Queen” after the pair had won a pre-championship series for the African Trophy.

What makes a successful dinghy racer? The same as for all competitive sports according to Don: desire to win, and dedication to learning the skills required to achieve it. You need a fast start (25% of the race, he reckons), then to detect and react to wind shifts, sensing when to tack, when to delay etc. You also need to know the rule-book, inches thick in dinghy racing, that governs interaction with other boats.

The sport has changed hugely, of course. Boats are no longer made of wood: the modern plastic “soap-dishes”, as Don calls them, are all fitted out in the factory these days, can be rigged up in ten minutes and don’t demand the degree of maintenance once needed. And there are more alternative leisure options in and out of the water. He and Ann taught their children and grandchildren to sail and windsurf (as well as up to 300 schoolboys over the years at Highgate), but found that they preferred other sporting careers – one daughter became a tri-athlete (twice coming runner-up in her age group in European championships), another a leading distance runner and bi-athlete. “Something in the genes”, Don says.

He continues to derive pleasure from his role as oldest member of the Hastings & St Leonards club as it engages novice and experienced sailors alike, young and old, with the pleasures of wind and waves. Eight years ago a young Hastings-trained sailor Max Richardson won a world championship under-19s gold and overall bronze in a 29er. The prospect is fair for more, even if the Commodore himself must stay beached.