This winter’s Tennis Sussex (TS) men’s and women’s doubles leagues resumed at the beginning of this month as the first form of competitive tennis in the county since March. But not for long. After a decision of the TS Leagues and Competitions Committee last week, all leagues have been suspended indefinitely again because of renewed concern about Covid-19 infections.

The Committee say they had already become aware of instances where players were having to isolate themselves for 14 days after playing matches, while their team members and opposition players were informed to call the NHS on 111 for further advice. Given the risks associated with car-sharing over the length of the county – potentially from Rye to Chichester – it was decided that the leagues could not run “in a manner that would be fair to all”. In particular, issues of promotion and relegation might be influenced too heavily by Covid incidences.

The Committee added that fixtures which were scheduled within the format of the winter leagues may still be played on a friendly basis, and results entered onto the tournament software “so that clubs and teams can measure their progress”, though no promotion or relegation will ensue. But initial reaction within the local Amherst club at least, suggests that players are unlikely to interest themselves in such contests where nothing is at stake.

Clubs registered for the league competitions may have their entry fees repaid, though they are also asked to consider donating them to TS.

However, mixed doubles play in the Wealden League, which features club teams from East Sussex and Kent borders only, is set to continue pending any further local lockdown or tightening of restrictions on play emanating from the Lawn Tennis Association, according to overall co-ordinator Sarah Chapman of Amherst.

“National LTA guidance is that competitive tennis can continue,” she says, “providing measures are in place to maintain a safe playing environment and team members travel in separate vehicles as far as is possible/practical, with face coverings to be worn if sharing transport.

“Travel distances are much less for these matches than some of the Sussex fixtures, and we will all ensure we maintain sensible Covid-19 guidelines.” 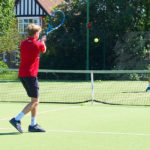