The visitors from North Kent scored with a well-struck penalty This was to be the only occasion the Hastings line was seriously threatened.

The home pack dominated the scrums and put the Cliffe defence under extreme pressure. After one try it was one-way traffic. A surging break from Frazer McManus put Max Mowbray into space to open the home account. Two more tries from the impressive Matt Stringer and Jake Stinson, both converted by scrum half Sam Surridge, gave H&B a 19-3 lead at half time.

Player coach Steve “Saucie” McManus was replaced at half time by promising newcomer Jack Hardy. This change did not disrupt H&B’s domination of the play and six more tries followed in the second half. Stinson scored three more, bringing his total for the last two games to seven; Joe Whitehall-Jones came on for Archie Ridpath and scored two out on the left wing; centre Dan Suggitt rounded off the day with a well-taken try. In the very windy conditions Surridge slotted two more conversions.

The whole squad worked hard and gave a good performance. Special mention should go to the vastly improved hooker Josh Clarke, the flare and tackling of full back Harry Walker and the powerful No8 play of |Frazer McManus. 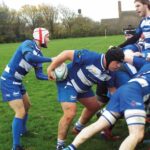 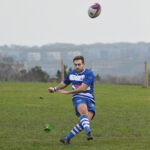 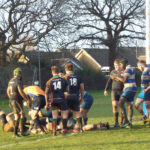 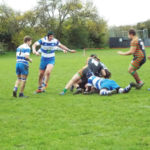