When you and I play crazy golf on the sea-front we’re there for a laugh. Competitive we may be, and secretly believing that we are endowed with special golfing talent – so that, when it’s taken six shots to manoeuvre the ball through the tunnel, up the curved ramp and back around a tight-angled corner into the volcano-style raised hole, we are inclined to reckon it must have been bad luck. We would do better if we were sober and tried it again.

But if you watch the leading competitors in the British Open Minigolf Championship taking place on the seafront Pirate Course this weekend, performing very soberly and succeeding repeatedly, you’ll realise that fortune has little to do with it. All you need is compendious understanding of the laws of physics, careful selection of the appropriate ball for each fairway – for which you should equip yourself with numerous variants, differing in weight, softness and “shore” (degree of bounceability) – nerveless precision in the direction and weight of the stroke, and the grace to lean down and pick your ball out of the hole without looking smug.

A hole in one is an “ace”. A hole in two is generally acceptable, more than that is seriously below (or rather above) par. Serious contenders will probably need to score an average of 30 or lower for each 18-hole round – that’s a minimum of six aces and the rest in twos.

Hot favourite to win the contest will be Michael Smith, a 30-year-old from Oxford who is described in the championship press release as three times world champion. After he won the British championship, played on the Hastings Pirate Course, in May last year he told me then that he was going to retire from the mini-golf circuit at the end of that season because he found the competition “too stressful”. But he clearly remains addicted: back again this year, and virtually sweeping the board in a series of tournament victories at Nottingham, Hastings, Dorridge (Solihull) and Worthing, showing equal mastery over crazy and mini-courses alike. (What makes a course crazy? It must have a windmill – that’s official). There are other contenders, though – in particular Adam Kelly, ten years Smith’s junior, who beat him into second place in the British Championships at Hoveton (Norfolk) in May.

The competition over the next two days will no doubt be intense. And it’s open and free to all spectators. If you want to get the last laugh in your own mini-contests – rather than leaving it to that derisive pirate figurehead at the exit – go and watch how. 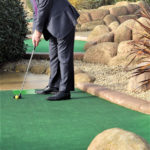 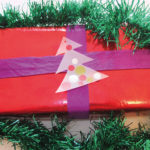 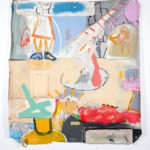 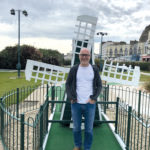