The sports clubs and societies of Hastings and St Leonards are legion. From American footballers and archers through to yachting sailors and yoga groups the experience of gathering together for physical contest or self-improvement becomes a central experience of their respective members’ lives. The club venue or sporting arena beckons them each week in season as regularly and prescriptively as church bells summoning the devout.

But the biggest adult sports club in town – Hastings Runners, boasting 429 members at last count (95% resident within the borough, I am told), most of them active and turning out at least once a week – has no home premises at all. Or rather the whole town is home, its streets and pavements all equally accessible to the pounding of running shoes any day or night of the week.

That’s not to say the club doesn’t lay out a regular weekly routine. Monday evenings serious competitors borrow the Hastings Athletic Club track at William Parker to run measured distances on the even rubber surface. Tuesdays and Wednesdays offer a wider range: members meet at Horntye, divide into groupings of up to 15 according to gradings of pace and, led by training coaches, run for around an hour through the streets. Saturday afternoons there’s a two hour run on similar grading lines, starting from Grosvenor Gardens on the sea-front. Sundays there are a variety of options, including away trips to local village courses where hard tarmac can be exchanged for muddy footpaths and bridleways. And if any or all of these club-led meets are not enough, members can and do organise their own mini-runs on social media – there’s a members group on Facebook – at times and over distances to suit themselves.

There are also formal competitive runs, as this coming Sunday 19 February when at least 90 will race along the sea-front from Eastbourne Pier to Hastings Pier, a distance of 16.4 miles. This event, commemorating a deceased member Brenda Boyle, is for club runners only. However the club also enters the general round of local open events: coming up in March are the Eastbourne Half Marathon on the 5th, an East Sussex cross-country league race at Pett on the 12th, and the Hastings Half Marathon on the 19th. Expect the distinctive club vests, black with two green bars across and white lettering, to be well to the fore in all these, while a mass of 160 members will be entering the Hastings event.

The membership fee is a remarkably low £10 per year, though members have to pay individually for use of the William Parker track, for race entries and for any necessary transport. But with no premises to maintain, no equipment to purchase, and coaches and organisers providing their services free, what need of greater funds?

Well, England Athletics, the governing body of the sport, levies individual affiliation fees of £14 per year. That buys you some small discounts on race entry fees. Affiliation is also a requirement for entry into a club team. Some open races are team events as well as individual contests, and you can’t score points for your team unless you are affiliated. EA are keen to persuade clubs to affiliate their members en masse. It’s not just that it will maximise their income from this source. It also enables them to boast to Sport England, the dispenser of largesse from central government and lottery proceeds, that they are raising participation levels in athletics across the nation and should therefore qualify for a larger share for their sport, though some may feel that their tilting of funds towards an Olympian medal-winning elite has little relevance for grassroots (or tarmac) competition.

The response of Hastings Runners is currently split. There are those who feel that every member should be required to affiliate so as to promote unity within the club and move forward in solidarity with the governing body. A combined annual membership fee of £24 would still be a very modest outlay in comparison to the cost of frequently renewed running shoes (specialised for hard surfaces), not to mention the latest digital apps for time and distance measurement.

However many members are quite happy to turn out for training runs or enter closed club races only. What benefit is there to them in affiliating, and what’s wrong with a two-tier system, allowing serious competitors to compete, while leaving those who are there just for the joy and fitness benefits of social running to carry on as before?

The issue was debated, vigorously but with good temper, at an EGM of the club last week. It will be renewed at a forthcoming AGM.

Tim Jury, the urbane but also passionate chairman, seems happy to go with the majority. He himself discovered distance running only because his wife Ann asked him some years ago if he would join her in preparing to run the London Marathon. Her involvement fell away after that, but his increased, to the point where he now runs regular marathons for a farm charity Farm Africa – 30 planned for this year alone, to mark a 30th year of fund-raising support. “It’s a big part of my life”, he says. “I feel there’s something missing if I haven’t done a long run for a month or so”.

The Pier to Pier race on Sunday starts at 9 am. The leaders should reach the finish line just past Hastings Pier in a little under two hours. They may not all look like they enjoy it – but they go on doing it. 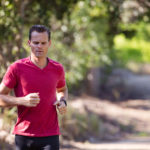 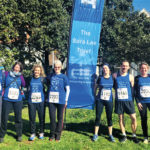 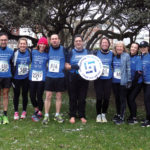 Run or Walk the Half Marathon

How to survive a half marathon