With no on-field contests or controversies to get worked up about over the past two months, and any further progress on the projected move to Tilekiln (see Hastings United Submit New Stadium Plans) some way off, Hastings United supporters have found an issue to put more immediate partisan feelings into: the design of a new club badge.

The existing visual image, used by the club for decades, is that of the Hastings Coat of Arms. It depicts three lions on a shield half red, half blue (or gules and azure, if you’re into heraldic language), two of them sporting ship hulls for hind quarters. The design harks back to the twelfth century when the port of Hastings was a key supplier of ships to the king’s army. For any patriotic football supporter, it also links in with the England team shirt, made iconic by the Baddiel and Skinner hit song. Which is all very fine –unless you’re trying to trade in image rights and realise there’s no copyright protection.

CEO Billy Wood has staked himself as a moderniser of the Hastings club since his arrival last October; and a modern football team can’t be modern enough without identifiably unique images to claim rights over. So a new design was commissioned, and unveiled a fortnight ago: a single lion’s head surrounded by what might be seen as a necklace of flames. He (or she) has arrived with a new motto too – “Pride. Passion. Purpose.”

Mr Wood posted on the club website and on Facebook: “This is a big day in the history of Hastings United, something we have all been working towards – a decision and move not taken lightly, but one that was necessary to grow our club in the manner it deserves”. He went on to explain: “The concept was determined from looking at the coat of arms and saying, what do the three lions represent to us? We broke it down as supporters, staff and players, with the sense of unity that lifts up this place on match days. We wanted to show all those elements uniting to create ONE. That one powerful image is our message that together we are stronger and together we will take this club onwards and upwards”.

It would be an understatement to report that some of United’s longstanding supporters have not taken readily to their newly united feline mascot image. On the fans’ forum website, which is independent of club direction, there have been more postings on this subject than on any since the play-off defeat by Ashford over a year ago. “A cartoon badge that belongs in a comic”, was one verdict; “too Disney”, another

“Cliff D” posted: “Tradition is very important in football. Clubs that change names, colours and badges have no respect for the history of the club. Poor, misguided decision, and bad that the club felt the need to distance itself from the town it represents. Not too late surely for a U turn”.

“Vernon” wrote: “If the club are so passionate about us supporters, why did we not get a say. They could have put out three or four designs and let the supporters vote.”

“BigCliff” pointed out that the Premier League club Watford undertook an exercise of this sort last season, inviting submissions from supporters, then whittling them down to a shortlist from which one was chosen. That was then put to a vote against the existing badge – “And the existing badge won, almost inevitably”.

That doesn’t seem likely to happen here. Mr Wood has staunchly defended the re-branding and the image that has come with it. In a phone-in with members of the independent supporters committee earlier this month, he declared. “Any decision we make is done with thought and care. I can’t do 100% what every fan wants….And it would be incredibly sad if a badge change allowed anyone to change their attitude to this club… We’re together as one.” 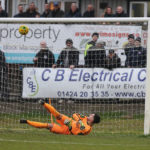