Young Italian striker Davide Rodari, top scorer last year but out since pre-season after surgery on an anterior cruciate ligament and not expected to play at all in the current campaign, is back in Hastings United colours. And his re-entry has sparked two thrilling wins for the ‘U’s that keep their promotion hopes in the Bostik League well and truly alive.

After only one victory in their previous seven games, and none away since New Year’s Day, Chris Agutter’s side travelled to Crayford on 9 March to play VCD Athletic with Rodari among the substitutes. The game seemed to be heading for a 0-0 stalemate until seven minutes from time when Sam Cruttwell crashed a 25-yard free-kick against the bar. Davide, introduced less than 15 minutes before, slammed in the loose ball, showing that he had lost none of his predatory instincts during his long lay-off. Jordy Mongoy doubled the winning margin late on.

Back at Pilot Field last Saturday and entertaining runaway league leaders Cray Wanderers, who had lost only one league game all season, United conceded two goals in the first six minutes and seemed to be heading for humiliating defeat. But another 25-yard belter from Cruttwell pegged the score back to 2-1; Rodari (playing from the start this time) made it 2-2 from close range, and in the second half Jack Dixon netted with another superb strike for a 3-2 win.

With eight games left, Hastings won’t catch Cray in the league table but have cemented their position among the play-off hopefuls. However, promotion is also to be determined by points-per-game average. Next up are Three Bridges away and Ramsgate at home. There are no easy fixtures in this league, but United will surely go into them intent on two more victories. 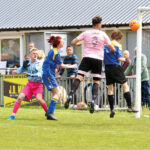