A high percentage of Premier League players started their careers within a top level academy like Manchester United or Chelsea. More were bought in with a multi-million pound price tag from Italy, Brazil or beyond. But the cheaper way for a club to get hold of burgeoning footballing talent is still to find it within the ranks of non-league clubs. Jamie Vardy was picked up by Leicester City from then Conference side Fleetwood Town; Chris Smalling by Fulham from Maidstone United before going on to Manchester United; Charlie Austin played for several non-league clubs in the Berkshire area before being started on the league ladder by Swindon Town. So it is common enough for any successful football team, even at the eighth tier of English football like Hastings United, to find itself hosting a swarm of professional scouts looking for that glint of gold dust: the player who has the talent, character and motivation to make the upgrade. 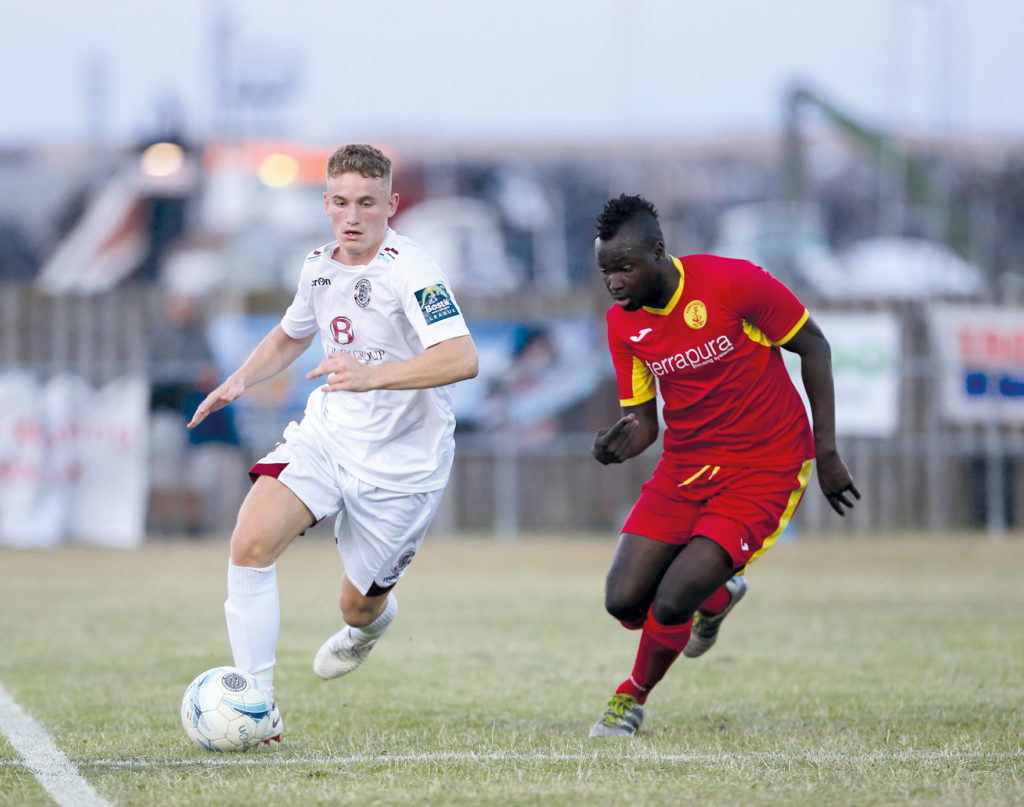 Last season, United’s 18-year-old Italian prodigy Davide Rodari attracted plenty of attention as he banged in goals at both youth and adult levels. Sadly for him, a cruciate injury has sidelined him for this season, and any renewal of interest will have to be re-earned if and when he comes back. Attention this autumn is reported to be focussed instead on Adam Lovatt, just 19 and already the midfield dynamo in manager Chris Agutter’s impressive side. Watford, Crystal Palace and Brighton & Hove Albion are among a number of clubs rumoured to be circling.

The attention is deserved. Lovatt isn’t the quickest or the showiest member of the team, few observers would immediately pick him out as top performer. But everything he does, with or without the ball, combines physical energy, technical proficiency and determination. He covers prodigious ground, rarely comes out of a tackle without the ball, and rarely gives it away once he has got it.

Lovatt is very much Agutter’s protégé, as Rodari was, too. It was Agutter who trained both of them at the Eastbourne Borough football academy, then persuaded them to move over to Hastings when he himself joined the ‘U’s in the summer of 2017. But he will not be too dismayed if a good club comes in with a serious offer – “I want players to go higher”, he says. Obviously he hopes that Hastings United will itself rise in the ranks and carry many of its young stars along. But in the meantime any capture from Pilot Field would boost the reputation of the United academy, which should in turn mean it attracts the best available intake. And no doubt any transfer fee for a change of registration would also look good on the club’s balance sheet.

FOOTBALL: Denied At The Death