Who would be a football manager? Jurgen Klopp and Mauricio Pochettino experienced the highest of highs last week as each guided their respective teams, Liverpool and Spurs, back from the dead in Champions League semi-finals to win famous victories. Literally billions of TV viewers worldwide will have shared their elation.

The joy of scoring: the ball in the net at Pilot Field
PICTURE: Scott White

But spare a thought for the losing managers of Barcelona and Ajax, as their apparently all-conquering forces fell apart and were humbled. A whole season came crashing down for each of them, the result determined by the width of a post or a split second of lost concentration somewhere, uncontrollably, on the field in front of them.

In the Bostik League South-East division, at the eighth tier of English football, results may matter only to a few hundred people within the ground and, at most, a few thousand beyond. There aren’t livelihoods at stake. It’s a game, for goodness sake. Nevertheless, when you’ve worked all year long with the principal goal of getting your team promoted, like Chris Agutter at Hastings United, the enormity of the gulf that opens up between success and failure after suffering last minute defeat must feel equally cruel.

In the final analysis Hastings came third and Ashford fourth in a league from which, at most, only two teams could get promoted. Cray Wanderers topped the table by some distance, so they took one slot. Coming second, third, fourth or fifth was qualification to enter the four-team play-off tournament, but the tournament winner would only gain the second promotion place if it had also finished the regular league season with a points ratio higher than in a number of other competing leagues. Under this bizarre system, imposed by the Football Association, a less than 2-points-per-game average proved effectively too low. And as Hastings had 70 points from 36 games, an average of 1.94, and Ashford 68, the latter’s semi-final win at Pilot Field on 29th April, was, in retrospect, academic. Neither could have been promoted anyway.

But, looking back, one can see how fine the margins were. Another two points would have sufficed. Ashford’s late equaliser in the 2-2 draw on Easter Monday was the goal that can be said to have cooked United’s goose. But then what about earlier in the season – Horsham’s added time equaliser in the February away game? Or the home draw against struggling Guernsey, the previous Saturday, when United had to play most of the second half with only nine men after two were sent off? Alternatively, what if Thamesmead Town had stayed in the league instead of dropping out mid-season and having the results of their matches annulled? Hastings had already put five goals past them in the opening game, and would surely have won the return – in which case the ‘U’s would have finished with 76 points from 38 games, and thus attained the 2-point average. Would they then have entered the play-offs with just a little more confidence, and won them?

What if? That way, madness lies. A sensible manager – and Agutter is surely that – will have jettisoned the hypotheticals, laid aside his disappointment and focused back on the many positives of the season. Famous wins – the FA Cup game at Leiston in September, the defeat of Cray in March after conceding a two-goal start; the development of young players, like Adam Lovatt and Jamie Fielding, who made enormous strides during the season; the quality performances of older players like Sam Adams and particularly Jack Dixon, who deservedly won both manager’s player and players’ player awards at the end-of-season beano last Friday.

Then he’ll start planning for next time. 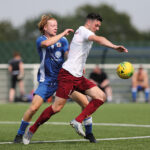 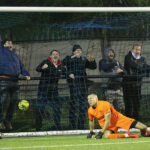