At a recent AGM of the Hastings United Independent Supporters Club, the CEO of Hastings United, Billy Wood, held a fascinating question-and-answer session. Perhaps inevitably, the key questions were about the plan for the new stadium at Tilekiln. Wood commented upon the process of obtaining planning permission but showed particular concern about the deeper issue of how the unique atmosphere of Pilot Field could be maintained in the transition. It is critical, he argued, that “we do not lose who we are”. He allowed that many new stadiums can be concrete blocks without soul: more like “second-rate airports’ than theatres of dreams.

Atmosphere is an intangible element in football success. Even Premiership clubs have lost something of their soul in recent moves: West Ham United and Southampton spring to mind (readers may, of course, disagree). Wood’s convincing re-assurance to the supporters was that he and Daren Burney – head of the Burney Group behind the new plans – were both “football people” and not about to “lose the magic”.

Wood spoke of a passionate commitment to the Hastings community and that this is at the heart of his vison. There is much he can point to in support of his claim: the expanded youth academy system, the introduction of walking football, family fun days and the huge number of boys and girls able to use the club facilities.

And Hastings United is, as Wood says, a set-up with “huge ambitions” and, as they say, ‘up for the journey.’ The fact that the men’s team has topped the South-East Division of the Isthmian League for the last two years and yet been denied promotion, thanks to Covid and some league politics, certainly suggests that manager Chris Agutter’s football brain is wired for success. Women’s football is another fantastic success: the women’s team have just won their League at the first attempt and have been promoted to the London & South East Women’s League for 2021/22.

The meeting itself encompassed some smaller scale and yet still important questions: supplies of replica kits, arrangements for away trips, and how the game programme should be structured. In these details the club still depends upon many volunteers. Some of the supporters felt that more posters around the town might help drive already healthy crowd numbers up further. More seemed to feel that social media – and indeed United and the Supporters Club’s use of such media – were the most effective communicative tool. Evidently, old and new technologies need to work in tandem.

But Wood’s uplifting vision for the future hinges to a great extent on building the new stadium. He was very candid about “obstacles” that have slowed progress, but it seems that a decision on planning permission is likely to happen towards the end of July. The Borough Council has been generally supportive and the outcome is expected to be positive. In practical terms, United are hoping to move to Tilekiln after two more seasons at Elphinstone Road.

If and when the plan is realised, the town will have not just an improved football ground but a great new sports complex with an exciting range of facilities: floodlit 3G and MUGA pitches, a large gym and sports therapy rooms, classrooms, a function suite and, last but not least, adequate car parking. Billy Wood exudes great commitment to this dream. As he said, United are seeking to add to the passion and pride the club already fosters as they build ever upwards. Judging by the mood of this meeting, there is no chance of lost souls and far more of a sense of ascension to higher things. 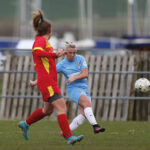