Hastings & St Leonards Priory Ladies cricket team suffered their second defeat of the season on 16th June when they lost to St Peters, Brighton, in a T20 encounter at Horntye. However, in contrast to their season’s opener against Eastbourne two weeks before when they were dominated by more experienced and accomplished opposition, Priory felt they gave a good account of themselves. They scored 135 runs in their 20 overs for the loss of only one wicket, and were overhauled by St Peters with only 13 balls to spare.

“I think we did really well,” said captain Kerry Henman at the end. “I’m happy with the way we played”.

The women’s T20 format varies from the men’s equivalent in several respects. It is 8-a-side, and contested on a playing area with very shortened boundaries –  more like a stoolball arena than a standard cricket field. Batters who attain a score of 30 are instantly retired, though they can re-enter the fray once all other team mates have had an innings. No bowler may bowl more than four overs, which means that, with the wicket-keeper excluded, at least five of the seven other players may need to bowl a full stint.

The aim is no doubt to induce maximum involvement of all eight players: there’s no hiding place in the field, nor protection for weaker bowling abilities. But the consequence, on the evidence of this game at least, is to provide perhaps over-favourable conditions to the batters, who not only face bowling of, let’s say, variable accuracy and penetration, but can also direct their shots into a sparsely manned (womanned) outfield, with the boundary ropes also invitingly close. The combined score for the afternoon was 273 runs for two wickets – one bowled, one run out – which confirms the unequal contest between bat and ball.

For Priory, Sophie Allan, Kiera Bates and Katy Allan all made scores of 30 or over; two of St Peters’ batters did likewise. What turned the match for the visitors, though,  was their confident running between the wickets. Priory fielded competently for the most part, with keeper Bates outstanding, but could not prevent the scampering of singles or the turning of ones into twos by St Peters’ positive intent. The Hastings team needs to learn to do likewise.

And there’s plenty of time and scope for learning. Several players are in early to mid-teens. Captain Henman is only 21. None gets any opportunity to play at school. “We aren’t allowed to play at Battle Abbey”, I was told. “The boys play cricket; girls play rounders”. At secondary academies in Hastings there’s no cricket anyway.

It would be possible for the more accomplished to turn out for men’s club sides on Saturdays – there’s no formal segregation in Sussex league cricket. But none of this ladies side does. “I’ve never thought about it”, says Henman. “I score on Saturdays”.

Hastings & St Leonards Priory meet for practice at Horntye every Friday evening. They would welcome more players of any age and standard. They would also like to attract a commercial sponsor. 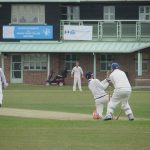 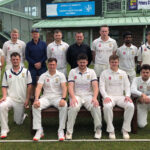