Amateur sport of any kind is still only allowed nationally under the conditions of the coronavirus pandemic if it involves a gathering of no more than six players and there is no close contact between any of them. But those limitations leave scope for some limited cricket practice sessions and, like Premier League footballers who were called back into training by their clubs before it was clear when or how competitive football would return, the cricketers of Hastings & St Leonards Priory have been called up for practice sessions, taking it on trust that there will eventually be some kind of truncated 2020 season to practise for.

Fortunately for them, their ground is owned by the Horntye Trust, not by the borough council. So regular net sessions have been convened for several weeks now – on Monday evenings for juniors, Tuesdays and Wednesdays for adults, with set times allocated to small groups – conforming to English Cricket Board (ECB) guidelines. The nets have been set up in the normal way, though with only every alternate strip used, so as to ensure physical distancing between batsmen. Bowlers only deliver, and field, their own balls. It’s better, no doubt, than shadow play in the confines of a back garden. But what are the prospects of getting back out to the middle?

When will cricket return to Horntye?
PICTURE: Reg Wood Photography

No extension to the season

The 1st Central Sussex Cricket League in which Hastings Priory competes – returning to the premier division after promotion last summer – had been hoping for a commencement to the league season on 4th July. That should in principle have allowed each of the ten clubs to play each other once, either home or away, over the remaining weeks available. Last week, however, the ECB advised that a return to ‘recreational’ (as opposed to professional) cricket was now unlikely until later in July at the earliest, while the league authority has determined that extending the season into the second half of September is impracticable for clubs that share their grounds, as many do, with football or other winter sports.

In these circumstances two potential options have been put forward to the clubs.

The first is to aim for a start of the Sussex league programme on 11th July, abandoning any T20 competition, and also suspending any promotion or relegation between divisions – the majority of clubs having indicated that they regarded what would effectively be half a season’s results as insufficient material to base these outcomes on.

If the start is further delayed, the second option would be to play out as friendlies such league programme as may remain if and when it is allowed to resume. Alternatively, a localised T20 competition could be contested over the month of August, with each club getting five or six matches and some kind of finals event being held for group winners.

League chairman Gary Stanley states that the feasibility of this idea is currently being looked at. However, he acknowledges that any scheduling devised by his authority to rescue what remains of the season from the wreckage of the pandemic is contingent on local attitudes: “Whatever we do will be entirely optional. We understand and appreciate that many players and, in some cases, entire clubs will simply not want to play cricket this season.”

Cricket is not a game that’s played generally at close quarters. The distance between the bowler as he lets go of the ball and the receiving batsman is in the region of 18 metres. Apart from a wicket-keeper standing up to the stumps, even close fielders are generally stationed at least two metres away. But as with other competitive sports, a return to full normality doesn’t seem compatible with rigid maintenance of two-metre, or even one metre, distancing. What about the fast bowler’s slip cordon? What of umpires, who at club level tend towards the more vulnerable bracket for Covid-19: elderly and male?

John Morgan, chairman of Hastings Priory, is personally keen to get the sport up and running again, but sees difficulties off the field as well as on it. He points out that Sussex league matches often involve the away side in lengthy travelling – the round trip from St Leonards to Middleton and back, for instance, is 120 miles and upwards of three hours in a car. In order to avoid close contact with a team-mate, would each player have to make his own way? Morgan recognises the advantage at this stage of opting for matches with more local clubs like Bexhill, Crowhurst and Rye, even if the standard of opposition may be lower.

Subject to further guidance arriving from government and/or the ECB, the league authority has indicated that further decisions should be made next week. In the meantime Priory players will continue to limber up in the nets. They won’t have an overseas recruit this season, but Sussex county batsman Harry Finch has agreed to make himself available, and they aim to be as ready as any other squad for whatever programme is offered. 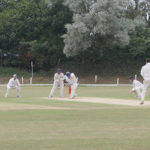