On 14th August Hastings Priory won their first Sussex Premier League match since early May. Even then they remained rooted firmly at the bottom of the league table, their chances of avoiding relegation looking slim with only three games left to overhaul Haywards Heath and Cuckfield – the latter in eighth place, 22 points above them.

But with a tortuous one wicket defeat of Brighton & Hove followed by a remarkable back-from-the-dead victory at Cuckfield last Saturday, they have doomed Haywards Heath to the drop instead and themselves opened up a 16-point lead over Cuckfield with just one match to go.

The game against Brighton & Hove seemed in the bag when the visitors to Horntye, electing to bat first, were skittled out for 102 in 35 overs, spinners Dilshan De Soysa and Adam Page claiming eight wickets between them for just 44 runs. When Priory batted, the young opening pair Harvey Faulkner and Dylan Woolley put on 32; but nine wickets then tumbled for 60 runs, and it was left to the last wicket pair of John Morgan and Adam Page to scrape home.

Against Cuckfield, Priory won the toss and chose to field on a good wicket that offered some help for bowlers.. They were soon rewarded when Adam Barton (2 for 40) struck to remove the dangerous Joe Ludlow. The home side began a recovery led by Joe Cambridge until De Soysa (4 for 48) took three quick wickets to reduce the home side to 105 for five. Priory captain Tom Gillespie continued to rotate his bowlers effectively, well supported by some enthusiastic fielding. Page (1 for 33) and Faulkner (2 for 37) took important wickets, and Morgan and Ryan Hoadley both bowled well without success, but Priory could not prevent their relegation rivals, led by former Sussex star James Anyon (45) and Ollie Graham (41), finishing with a formidable total of 239 for nine in their 50 overs.

In reply, Priory were quickly in trouble as Anyon (3-52) and young pace bowler Will Rogers (3-47) reduced their batting line-up to 44 for 5. Defeat and consequent relegation appeared odds-on.

Tom Gillespie (70) and Will Hutchings, with a Sussex Premier personal best score of 65, had other ideas, sharing a brilliant partnership of 149 runs, based on skilful strike rotation and good defence, punctuated with some explosive hitting. But both fell in the 44th over, leaving 45 still needed off the last 31 balls with just three wickets remaining. Enter the evergreen Morgan who hit a stunning array of boundaries in a score of 37 not out off 20 balls. Ably backed up by Hoadley, he saw Priory home to a priceless win with just five balls to spare.

Tom Gillespie said afterwards: “It was a great all-round effort reflecting our improved confidence and performances. Cuckfield have some top players. We battled all the way in the field and, despite a tough start with the bat, we dug in. Will [Hutchings] and Morgs played fantastic innings to turn it round, and I was so pleased to be part of it.”

Coach Ian Gillespie, Tom’s father, said: “The team has had some tough situations to cope with this season, but has shown fantastic spirit and determination over the last few weeks, and from nowhere we have given ourselves a chance. The batting from Tom, Will and Morgs was outstanding under great pressure.”

Priory now face local rivals Eastbourne in their final league game at Horntye tomorrow (Saturday) knowing that a fourth successive victory will secure their future in the Premier League next season. Even if they lose, Cuckfield will have to win away against champions elect Preston Nomads to overhaul them. Anything is possible in this league, as Priory have shown, but the odds this time are firmly in favour of the Hastings side to survive. 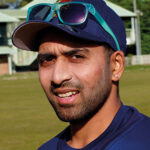 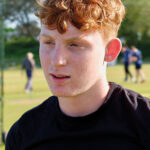 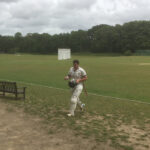