White Liars
There was nothing amateurish about the production of White Liars by Peter Shaffer at the Stables. It’s a one act play with just three characters: an elderly fortune teller and two young rock musicians who connect by chance in a near deserted seaside resort in February. This nostalgia is an instant seduction for an audience heady with the Hastings vibe. The play is a subtle dialectic concerning the boundaries between truth, fantasy and lies. Do the differences matter? How does the process of revelation, the shift from one ‘reality’ to another affect perception, understanding and forgiveness? Is a white lie really any better than a manipulative fabrication? The pleasure in this subtle interplay could so easily be hampered by halting dialogue, by a misunderstood nuance, by traction in the timing of conversation which so often marks am-dram. There was none of this. The lucidity of the performances was impressive from the superb and clearly very experienced fortune teller, to the very inexperienced, but accomplished two young actors playing the musicians. The set was elegantly spare, with each item doing exactly the work that was needed: a series of clapboard screens created a promenade, a table with a crystal ball, an opaque glass back drop etched with the name of the fortune teller in reverse created the shop’s interior and exterior. Against these the costumes blazed gorgeously with faultless sixties styling.

Black Comedy
Put together a posh girl with a stuffy colonel (her father), an ineffectual artist, his hippy girlfriend, a camp antique dealer, an emigré electrician, a millionaire and a frowsty old maid. Stir vigorously and you get a completely effervescent theatre of the absurd.

Add a power cut in which the actors are required to stumble about as if blind. It could so easily be wearisome, but it was beautifully choreographed with each character involved in their own blundering agenda, unconscious of each other unless accidentally bumping into them. As well as creating a social metaphor, the comic possibilities were expertly realised by an imaginative collaboration between director Leigh Shine and the cast. It was hilarious even to the last moment when the cast lined up and bowed facing the wrong way as the first night audience whooped and shrieked their appreciation.

All the characters are familiar types: the posh girl ambitious for her deceptively naive and impecunious artist fiancé; the blustering colonel with his fixation upon acronyms and whisky; the teetotal spinster with a taste for alcohol; the temperamental nouveau-riche antique dealer. All were portrayed with crisp accuracy as events unravelled and chaos racked up with an often breathtaking adroitness. There were no weak links in the casting and Graham Pearcey as the emigré electrician gave a great comic vignette performance as did Victoria Fay who plays the disarmingly dreamy hippy ex-girlfriend who restores order by unflinchingly exposing the agendas in play.

An imaginative double bill, and with superb actors, direction and staging this could create a new audience for the Stables. 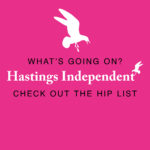 « FOOTBALL: Calculators at the Ready
‘Power to Change’ Releases Another £3m For Community Businesses »