It’s fair to say that free jazz, or free improvisation, is a niche within a niche. It’s often described as difficult music, but if you can put aside your preconceptions, surrender to the flow and allow the music to unfold, there’s a huge amount to enjoy. It’s intense stuff, but it makes you feel alive!

The legendary Trevor Watts (interviewed in HIP in March this year) opened proceedings with a stunning set on alto and soprano sax, in dialogue with drummer Mark Sanders.

I’ve been listening to some of the avant-garde music which Trevor pioneered in the 1960s, also in collaboration with a drummer, John Stevens. It’s characterized by what has been called ‘extreme discontinuity,’ built up of tiny shards of sound. Even fifty years on, it retains its capacity to disconcert.

By contrast, Trevor’s set this evening was more spacious and linear. Watts has incredible energy and vitality by any standards, let alone for a man just turned eighty, and a seemingly inexhaustible capacity to weave spikey inventive lines. I found myself thinking of the music in terms of natural forms like mountains or the sea. Dynamic, exciting, and slightly terrifying.

After the break, it was over to Somersaults, an apt name that captures something of the playful sense of movement in their music. The trio features Olie Brice on double bass, Sanders again on drums (he surely deserves a medal for his stamina!) and Tobias Delius on tenor sax and clarinet.

The trio are currently touring their second album Numerology of Birdsong. I was fortunate to hear the album before the gig, and it was fascinating to compare the more contemplative sound of the studio album with the bristling energy of the live set.

Somersaults have an instinctive sense of shape, an almost telepathic feeling for when to change the mood and texture. At times, Delius seemed to gnaw obsessively at a motif, the repetition giving something for the audience to hang onto and allowing the bass and drums to create ceaseless rhythmic variation beneath the melody line.

As the set progressed, the music moved from sounds with clearly recognizable jazz elements into (even) more experimental territory. One extraordinary section started with the players working at the very extremes of their instruments, Sanders using metal wires to elicit shimmering sounds from his drumkit with breathy harmonics from the sax.

The interactions between the players gathered a momentum that built to an incredible peak of intensity, with Brice treating his bass almost as a percussion instrument while Sanders unleashed furious torrents of polyrhythms from his drumkit.

This was a mind-expanding opportunity to become absorbed in live music-making of the highest order. Here’s hoping it becomes a regular event. 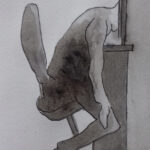 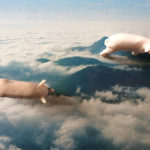 But Pictures of Our Thoughts 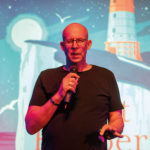