I’m not overly fond of flowering cherry trees. I mean, why cultivate something purely for its garish blossom which only lasts a week or so? Better, surely, to grow its cousin which actually produces fruit.  But I have to accept that there is a widespread interest in ornamental or cultivated cherries, and in Britain this interest was largely propagated by a man who lived in a Kentish village just 15 miles outside Hastings.

Following service in WW1 ‘Cherry’ Ingram, as he became known, bought The Grange just off the village green in Benenden, and set about transforming its extensive grounds. He took his inspiration from Japan, a country he’d already visited twice, the first time in 1902 as a young man of 22, and the second, five years later, on his honeymoon.  On both trips he was captivated by the national tree, the ornamental cherry.   More than 400 different varieties had been cultivated in Japan over the previous 1200 years.

Now a Japanese author, Naoko Abe, has shed a whole new light on Captain Collingwood Ingram and his extraordinary quest to import as many different species of ornamental cherry trees as he could find. A large number came from the London office of the Yokohama nurseries, but others were given to him by an ever expanding network of Cherry aficionados in Britain and around the world.  One fellow enthusiast, Annie Freeman of the Greyfriars estate in Winchelsea, gave him cuttings of two particular varieties – Daikoku and Taihaku – both originally from Japan.  By the time he had published Notes on Japanese Cherries in the Royal Horticultural journal in 1925 Ingram was recognised as a leading expert in the field of identifying, propagating and hybridising cherries and had more than 70 varieties growing in Benenden.

Naoko Abe skilfully interweaves Ingram’s story
with the history of Japan and
the country’s fascination – almost obsession – with the cultivated cherry and its abundant and varied spring blossom. She
charts how industrialisation
and natural disasters like
the great earthquake and
tsunami of 1923 had massively
depleted ornamental cherries in
urban areas across the country.

Thus, when Ingram returned to Japan in 1926 he was appalled to see the decline in interest in the trees and their varieties. Most extraordinary of all he was told that one species, the Taihaku, had become extinct. “But this cherry is growing in my garden in Kent” he told an incredulous cherry expert in Tokyo.  Addressing the Cherry Association of Japan a week later Ingram promised to reintroduce both the Taihaku and another possibly extinct variety, the Daikoku.

How he went about this forms a core part of Naoko Abe’s book, whose full title is Cherry Ingram, The Englishman Who Saved
Japan’s Blossoms. For the non-horticulturalist the technical details might at first seem a trifle indigestible, but the book’s structure along with her fine prose and detailed research make it a riveting read.  Never more so than when she gets to Japan’s imperial ambitions leading up to and during the Second World War. She explains in painful detail how the Emperor and his military commanders used the image of the transient cherry blossom to motivate the army and even to inspire the kamikaze pilots, many of who has blossom images painted on their aircraft.

It’s a particularly poignant tale because Ingram’s future daughter-in-law Daphne was in Hong Kong when it surrendered to the Japanese in December 1941 and she spent much of the rest of the war in internment camps. After her marriage to Alastair in 1947, Ingram had to be particularly careful when discussing his early love of Japan and its culture with them.

For Kent and Sussex residents Abe’s book is particularly fascinating, with tidbits of local detail dropped in throughout, including Captain Ingram’s time in command of Benenden’s Home Guard platoon – every detail redolent of Dad’s Army. He never lost his fascination with the Japanese ornamental cherry, but the number of the trees he maintained at the Grange slowly declined up to his death aged 101, in 1981. It’s a meticulously researched book full of fascinating details about one of the area’s most respected and, possibly, most eccentric residents. 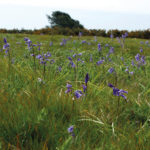 « MINI REVIEW: Do Journeys End In Lovers Meeting?
St Leonards Festival 2019 Is On! »