I’m told that the best way to appreciate a foreign country is to live like the inhabitants. So, on a recent trip to the US, I turned native and spent hours on my supersize bed, engulfed in a resplendence of cushions as I watched Netflix.

Quickly bored by the Borgias ( and somewhat sickened by a desiccated Jeremy Irons’ gif-like seductions of young Lotte Verbeek) and fearing my Republican spirit might be compromised by too much exposure to The Crown, I reverted to type and tapped ‘Art Films’ into Google.

I found Sky Ladder and an extraordinary artist, new to me, but who may be familiar to you: Cai Guo-Quiang, who paints with gunpowder and creates installations with fireworks.

His work was the most ecstatic surprise. How very appropriate that it took someone from China, which invented gunpowder centuries ago, to use it as an art form, and the sight of these exquisitely orchestrated displays is well beyond an earthly treat. Always exciting, firework displays designed by Cai become entrancing on a much deeper level. Imagine the time, the expense, the expertise that goes into creating an artwork that lasts just minutes, that were it not for film would literally flee before our eyes. They are extra-terrestrial fire-ballets with a shorter life span than a mayfly.

The film gives spare and respectful biographical details: his childhood under the regime of Mao, some family stresses, a poignantly conflicted relationship with his father, but is not intrusive or mawkish and focuses too on the strength of his connection with his grandmother for whom he performs his lifelong ambition of creating a burning ladder connecting heaven and earth.

The film is framed by this ambition, which he achieves on his fourth attempt, and shows us his many different kinds of installation as well as his drawing method which involves trailing gunpowder onto a canvas, covering it with boards and setting light to the touch paper. The results are profoundly beautiful.

Most moving is the scene of his final realisation of the burning ladder: a structure suspended in the sky by an air-balloon and reaching 500 metres into the heavens. After months of preparation, he lights the end of one of the struts and we watch the fire travel swiftly up the sides and along each rung, until the whole blazes with a pure white flame. In minutes the charred struts extinguish the light and the moment is over, but the experience stays in the imagination, I think, forever. I’ll let you know.

His grandmother meanwhile at the age of 104, a diminutive, speechless and crinkled old lady, watches the event on an iPad.

Cai Guo-Qiang’s work is a fine interweaving of ancient and contemporary sensibilities, and an exquisite brush of beauty with violence, those two ancient and compelling forces which so often  give works of art their power and he does it through his play with time: working a lasting change on the imagination with his most evanescent and transitory creations.

Arts Diary In The Time Of COVID-19 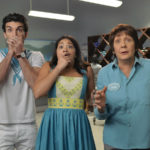 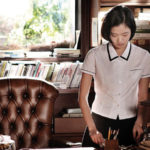