Themed film screenings for families. Dress up and chill out
Review by Simone Witney

How often do we wish to tear children away from their devices for something more natural and serendipitous: making ships by moving the furniture in the house or tents out of a sheet. It was something of this spirit (as well as a timely piratical theme) which ran through the first Spools Out event: “themed film screenings in unusual settings”. The first film shown in the Stade Hall was the original 1974 Swallows and Amazons. Families were met by a friendly and enthusiastic pirate (Julia Andrews-Clifford) and chose stickers for either Swallows or Amazons. Each family had to be one or the other: “we don’t split up families here” growled the pirate. 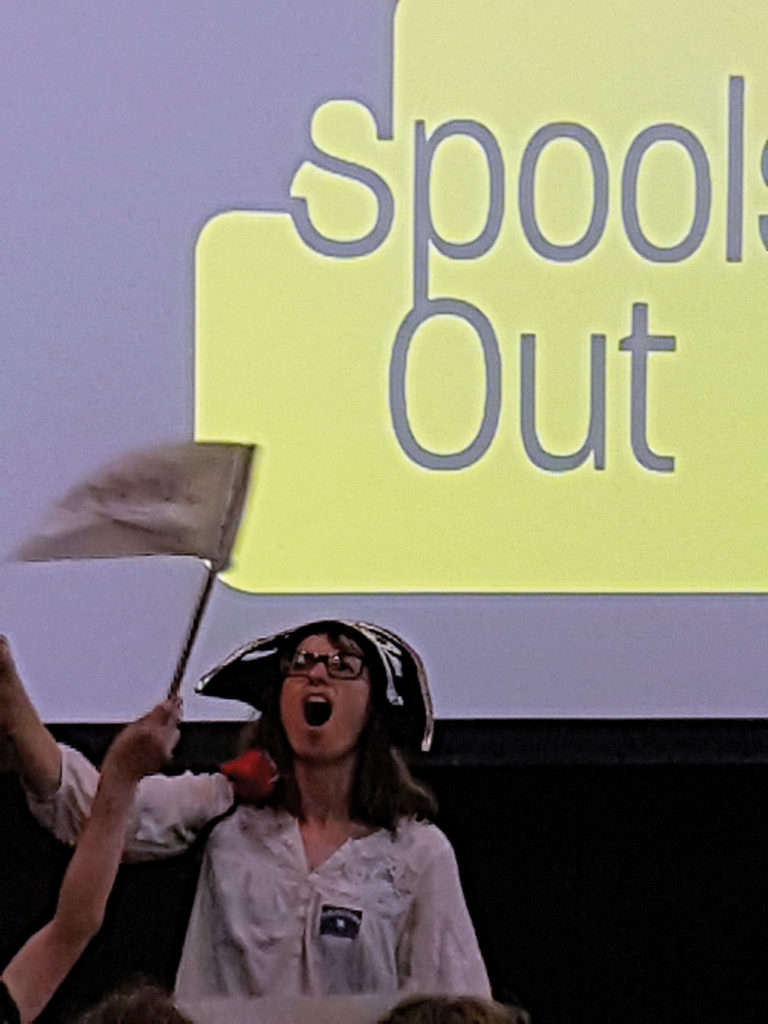 Triangular flags were given to the swallows, square to the amazons and the children rushed towards the tables which flanked the room with coloured pens for decorating the flags. There was considerable roaring and flag waving for each party before hunting for treasure in the Stade, but the gold bullion was shared out equally and without tears. Beneath the screen, Julia and Spools partner,  Paul Homer, had placed props from the film: rope, firewood, a typewriter, treasure chests. The children were meant to shout out the first time they saw any of the props in the film, but in fact this group of excited, chocolate mouthed 3-9 year-olds went into a state of instant enthralment as soon as the film began and had to be reminded. The film is, of course, a wonderful vision of parent-free adventure in which children are resourceful and simply brilliant at sailing boats, lighting fires, handling knives and other dangerous un-urban activities. They are also, I was relieved to see, a model of co-operation and egalitarianism: boys and girls are equally skilled (though the oldest girl does the cooking,
the youngest spends a night alone in a tent on an island) and they
all look out for the youngest sibling. Though childless, I did my fair
share of roaring and fell into the same enchantment. It was a sweet morning. Other events are planned at different venues and you can find out about them on facebook.com/spoolsoutfilm or at Instagram.com/spools_out

Spools Out, Swallows and Amazons