Lindisfarne at St. Mary in the Castle. Reviewed by Colin Gibson

Newcastle folk rock band Lindisfarne has produced, in its various incarnations, an extraordinary collection of great material spanning almost fifty years, the vast proportion of which was penned by the late Alan Hull. As the bassist on Hull’s solo album, Pipedreams, and with my own musical roots strongly entwined in the North East, I attended the sold-out show in St. Mary in the Castle on Saturday (March 24th) with a good deal of interest. 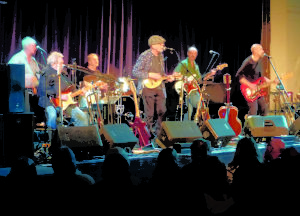 An expectant crowd containing most of Hastings’ ex-pat Geordies turned out on a cold March night to see the latest line-up, assembled by original bassist Rod Clements, now on guitar, mandolin and fiddle, which featured guitarist Charlie Harcourt, (a fully paid up member of Lindisfarne Mk II and founder member of Newcastle legends The Junco Partners); and post-Alan Hull stalwarts Steve Dagget on keyboards and guitar, Ian Thomson on bass and Paul Thomson, “snaffled” from Roxy Music, on drums. Notably, the line-up also included Hull’s son-in-law and former protégé Dave Hull-Denham, a member since 1994, on guitar and piano, who provided the uncannily Hull-like vocals for all of Alan’s songs. This top-notch band presented a great set – augmented by superb five-part vocal harmonies – which of course included Clements’ own Ivor Novello award-winning classic Meet Me On The Corner. Sound was provided by band mixer extraordinaire Professor Sparks, who managed to combat the venue’s tricky acoustics with clarity and depth, allowing the audience to fully savour Hull’s and Clements’ lyrical excellence.

They kicked off with No Time to Lose, a bonus track from their second album Fog on The Tyne, going straight into All Fall Down from Dingly Dell. What followed was an audience-delighting selection of a seriously underrated catalogue of songs (internationally speaking), written by masters of lyric and melody. From their first, delightfully ramshackled album Nicely Out of Tune we were treated to the enigmatic Edgar Allen Poe-inspired Lady Eleanor, the party-bust song We Can Swing Together (which inspired mass joining in) and the poignant, gorgeous Winter Song. From 1971’s Fog on The Tyne we got the band’s biggest hit Meet Me On the Corner, along with January Song, City Song, All Right on the Night and of course its eponymous title track, which sparked riotous participation from the delighted fans. Wake Up Little Sister, All Fall Down and Don’t Ask Me, came from their third album Dingly Dell. The penultimate song was a rocking rendition of their last chart entry, Run for Home, from 1978’s Back and Fourth, with the band finally leaving the audience’s ears ringing with Nicely Out of Tune’s insistent, hypnotic, Clear White Light. Also included were two delicious Clements–penned songs, Kingdom Come, and Whisky Highway, from his solo albums Stamping Ground and One Track Mind, as well as Hull’s United States of Mind, from the aforementioned Pipedreams.

This was a joyous, triumphant concert which delighted the capacity audience at St. Mary in the Castle. For me it also provoked nostalgic, happy memories of a great friend, whose untimely death at the extremely unripe age of 50, cheated us all of an amazing talent, but whose artistry – often compared with that of Bob Dylan – thankfully left behind a rich catalogue of timeless songs.

Lindisfarne, St Mary in the Castle

« Scamming on the Telephone
Singers from Seaview Steal the Show! »