Review and pictures by Anna Arnone

In a set scattered with rose petals and bathed in blood red light, Marta Carvalho propels us into the sadness, the frustration, the rage, the love, the tension, the pain, and the beautifully dark humour, experienced by her character, as she voices those most taboo of thoughts. Yes, she killed him she declares; but has she? She symbolically eats his ashes and he becomes part of her in a neat symbolic reversal of the power roles. She acknowledges the various familiar roles that woman can slip into and then the haunting possession of her imagination by an ex-lover in the aftermath.

To give it its full title, Labirinto de Amor e Morte (Labyrinth of Love and Death) was written for Carvalho by Moncho Rodriguez. Carvalho has performed this visceral, turbulent, one-woman psychodrama many times in her native Portuguese, having toured it in Portugal, Spain and Brazil. This experimental performance at the Wave of Dreams in Kings Road, St Leonards was its first in English.

Labyrinth is full-on physical theatre in which Carvalho takes us on a woman’s rollercoaster journey through a myriad of emotions in the aftermath of a relationship. The essence of the former lover is a ghostly presence at times as she weaves through the continuing effects of his influence on her, death and her subsequent freedom from the cloying ties that bound her to him even after the affair had ended. It resonates on many levels, bringing to mind elements of domestic abuse such as control, coercion, and physical violence, but also the more prosaic webs of dependency that can slowly entwine during such relationships, even when the end is a healthier option than remaining in a damaging affair. Carvalho skilfully draws us into those ambiguities that confuse and stymie efforts to move on. Questions are left hanging in the air:who ended the affair, was he violent towards her, did she kill him? Indeed, is he really dead at all or is this a symbolic death of both man and relationship from which she must now escape?

Described as a “fierce feminist monologue”, Carvalho delivers her words bluntly and passionately, fixing you in her gaze or a stare as she moves around the circular set. It is both fascinating and disconcerting as her questions and statements seem to be aimed directly at you!

The English translation is part of the collaboration between Carvalho and Mark C. Hewitt, writer and theatre maker. Carvalho had made a literal translation of Labyrinth herself but Hewitt realised it needed to be extensively rewritten to work dramatically in English. Carvalho then had to learn it anew, with a very short rehearsal period, in a staging that is much stripped down from the original Portuguese version. It will change as the pair learn from audience reactions and discussions after performances. Labyrinth raises many questions about the psychology of relationships and the difficulties of parting. For that alone it is worth seeing. 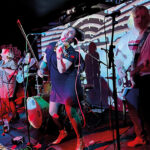 REVIEW: Slum of Legs and Codex Serafini rock The Brass