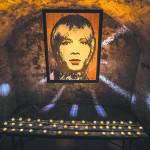 As we welcome the new year, it seems appropriate to reflect on one of the more sobering and thought-provoking cultural events of 2016, which provided a hopeful spark at the tail-end of a year that felt dominated by vacuous political slogans, polarisation and partisanship. Ben Browton’s December exhibition Gender Breakdown was small in size but expansive in its scope, presenting decades of newspaper reportage of transgender issues across the world and archive material from within the LGBT community.

The exhibition is optimistic in that it conveys a shift in attitudes to greater tolerance, both in the law and media representation; one example of the latter is Caitlyn Jenner’s Vanity Fair cover as woman of the year, which appears in the exhibition and which some see as a breakthrough in popular acceptance of trans issues. Of course Caitlyn has been a controversial figure, with some disputing her suitability for the title ‘woman of the year’ as a biological male, not least feminist progenitor Germaine Greer. Caitlyn’s experience of changing her gender identity as an outrageously wealthy celebrity similarly won’t reflect the experience of most people who choose to transition; Browton’s inclusion of the now famous front cover alongside artefacts from the darker underbelly of gender-transition, such as business cards for exploitative sex shops selling drugs to aid transition, reflects this conflict between air-brushed mainstream media representation and the less marketable realities. The critical recognition of transgender and gender-fluid musicians like Anohni (formerly Antony and the Johnsons) and Christine and the Queens, as shown in the exhibition through magazine clippings, can perhaps be a greater source of optimism about changing attitudes than Jenner’s fame, however the debate about trans media representation will inevitably continue, and should, in a world where the meaning of gender is shifting and expanding. Browton facilitates that debate with this collection, which charts the advances in awareness while spreading awareness itself by conveying the complexity and multi-dimensionality of trans history. This complexity is reflected in the largely unordered presentation of the articles, which communicates the non-linear way in which progress on social and trans issues is achieved; the frightening rise of a reactionary ‘alt-right’ today seems to attest to this.

The centre-piece of the exhibition is a moving shrine to Maxwell Confait (pictured), a transsexual whose murderer in 1972 was never brought to justice. His image is iconised as a symbol of a kind of futuristic beauty. Ultimately this exhibition succeeds because it presents trans history in all its glory and pain and conflict, while simultaneously being cautiously optimistic about the future.

« Tribute To Artist Harry Snook
There’s No Accounting For It »