The Lucy Bell Gallery’s current summer exhibition of British music culture, Days of Rock, is the perfect antidote for anyone who, like myself, has been struggling with the loss of such recreational freedoms during lockdown. The show features the work of a select number of photographers, whose images serve to encapsulate some of the most important musicians and associated acts of recent times.

After a quick socially-distanced greeting, gallery owner Lucy welcomed me in to the show, whilst bestowing copious amounts of hand sanitiser on
to my outstretched palms and enlightening me on all of the necessary safety requirements, such as a one way viewing system, around the gallery.

Lucy had also kindly invited one of the key contributing photographers – Syd Shelton – along for my visit, to provide an added insight into his phenomenal body of work. Syd’s vibrant images serve as a visual documentation of his involvement, as an activist and artist, in the Rock against Racism movement of the late seventies and early eighties.

His unique visual output conveys a decidedly intimate sense of youthful rebellion, along with the ongoing struggle for racial equality, for which music and one’s individual style was a much needed conduit.

Syd describes his involvement in this key point in British history as “A profound political act, one which was the product of genuine grassroots activism and a personal desire for wider cultural and societal change”.

Shelton’s image Anti-racist Skins features two skinhead youths and was shot in Hackney, London, in 1979. Its stripped back aesthetics and raw, unflinching depiction of  two anonymous young men, staring sideways-on in quiet defiance,  is one of the highlights of the show.

Jill Furmanovsky is one of the most renowned female photographers on the rock and alternative music scene. Her candid profile shot of a now sadly deceased Amy Winehouse is profoundly moving, and provides a direct contrast to her more animated photo of Joe Strummer, from The Clash, taken mid-way through a live show.

The carefully selected images of photographer, artist and filmmaker Andrew Catlin, suggest a deep sense of connection and sensitivity for his iconic subjects. This is epitomised in his photo of Patti Smith, which was taken in New York, in 1988. Catlin notes how the shoot had been unexpectedly disrupted by the unfortunate news that Patti Smith’s friend, photographer Robert Mapplethorpe, had been rushed to hospital. The image as featured in Days of Rock was taken shortly before Smith left her apartment to visit him and shows her in a disarmingly pensive state of vulnerability, one quite at odds with her usual, more self-possessed public persona.

Additional photographers featured in the show include: Colin Jones, Geoff MacCormack, Kevin Cummins, Terry Pastor, Gered Mankowitz, Brian Duffy, and Andrew Whittuck, all of whom give a tantalising behind-the-scenes glimpse into the lives of some of the most influential artists of all time.

From the rarely seen black and white shots of a flamboyantly coiffured Jimi Hendrix and The Experience – as taken by Gered Mankowitz – to the unexpectedly meditative photo of David Bowie, asleep on the Trans-Siberian Express, in 1973 (shot by long term friend of Bowie Geoff MacCormack), Days of Rock is a truly lovingly curated show and is an absolute must for fans of musical counterculture.

It’s worth noting that one of the greatest casualties of the pandemic at present is the live music scene, and whilst no-one knows when or how this will return in the future, Days of Rock provides a wonderfully vicarious alternative for the long, hot summer ahead.

• Days of Rock runs from the 3rd July – 29th August 2020. Further details about the exhibition can be found via the gallery website: www.lucy-bell.com 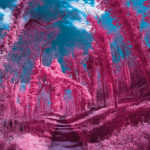 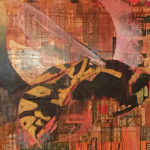 Danny Pockets and Shuby at the St Leonards 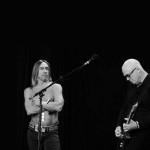