Needing something weird to review in Hastings, I didn’t have to look far. Coffin Club is reviewed by Angelica Campion. 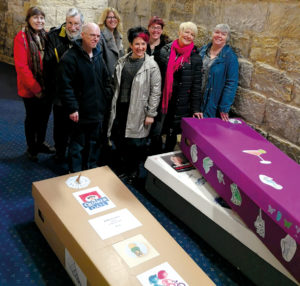 Coffin Club at St Mary In The Castle, run by celebrants Kate Dyer and Kate Tym, wasn’t what I expected at all. What was I expecting in Fancy-Dress-on-Sea? Hippies making paper flowers and painting cardboard coffins with wild designs, anticipating an early death?

It was a tiny group and they were not young, neither were they hippies. Ninety year old John Lynes for instance. An engineer who served as a human rights observer in Palestine, the West Bank and Kurdistan who intends to take part once again in the world naked bike ride when it comes to Hastings.

We started with a talk by progressive funeral director Jo Loveridge from Albany Funerals in Maidstone (she can do my funeral any day). She wants to revolutionise the way people approach planning their funerals, and then turn everything about death on its head. With the zeitgeist being about changing the status quo and dragging skeletons and gropey old men out of cupboards, surely this is the time to talk about death in a different way. Jo’s stories about the deceased, the way traditional funeral directors operate and the public’s attitude to death, are desperately sad, comic, and make us realise how unimaginative we all are.

Up in the gallery we viewed the coffins decorated with stickers about people’s lives and likes.
I asked where everyone intended to keep their large un-wieldy coffins until they were erm, needed. “In my garage”, “in our lockup”, “in the dining room”, they said. OK. Well, I guess that’s something else to trip over.

After refreshments brought by the members, a guy from a company called Andvinyly played a short film-advert about how they add a pinch of your ashes to the pressing of a vinyl recording of your voice. The idea being that, when you play the record it’s a bit scratchy but those scratches are you, albeit a dead you. He said people are wild about this idea despite the cost. I can’t see the attraction myself. Naturally, this business was dreamed up by a band on the road in a transit van. Olé!

Some students making a documentary about Coffin Club had started to film our little group but forgot to ask if we minded, so me and my companion (yes it’s that famous sculptor Suzie Zamit again! I was trying to persuade her to start a class called ‘Make Your Own Death Mask’) felt it was time to go.

Kate and Kate and their facilitator Larné, are just great. They are providing a service that no one realised they needed. But more people need to realise this! You don’t have to be old or even terminally ill and hopefully this wonderful idea will spawn a whole new way of thinking about death, at least in Hastings.

Go. Join! Coffin Club needs some life in it. 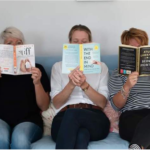