In Joseph Heller’s brilliant, anti-war satire, written between 1953 and its publication in 1961, the military clause Catch 22 states that an airman “would have to be crazy to fly more missions, and if he were crazy he would be unfit to fly. Yet, if an airman would refuse to fly more missions, this would indicate that he is sane, which would mean that he would be fit to fly the missions.”

Sadly, this overcooked miniseries adaptation is something of a paper bag, and the only one able to act his way out of it appears to be co-director George Clooney as the barmy Lieutenant Scheisskopf. Elegant, laconic, deadpan funny and box-office gold, he makes the character all his own. That, of course, may be no fault of the rest of the cast. An actor’s got to make a living after all, and this makes no effort to hide its bloated budget. But as someone once said after a visit to Elvis Presley’s Graceland, “I didn’t realise you could spend so much money in Woolworth’s.”

The original, flawed, but superior Mike Nicholls film, released in 1970 starred Alan Arkin as Yossarian, who inhabited the character with a perfect, seemingly effortless, hangdog cynicism. Christopher Abbott’s wooden portrayal is a long way from Arkin’s, as he mugs his way through a set of expositional signposts. Take the introductory scenes for instance; whereas Heller’s insistently non-chronological novel throws us directly into a hospital ward where the bedbound Yossarian is busy trying to avoid further active bombing missions, this series’ laborious opening episode, with its swing band and Lindyhop soundtrack, tries to ensure that even the slowest viewer will know we are on a US air base somewhere in Europe during the post D-Day allied advance. And so, sprinkled with the obligatory sex scenes, we plod chronologically on, ending up after around 10 minutes, at Heller’s opening paragraph.

DISCLAIMER: This review is based on half of the opening episode of a six-part series. One should really only judge an episodic drama after watching all the parts, but because I found the first episode to be such a glossy, laboured travesty of Heller’s classic novel, I found it impossible to watch the rest. Catch 22? You’d have to be insane to accept this mission. Read Joseph Heller’s wonderful novel instead, and let your imagination set the budget. 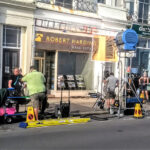 Close to Me: behind the scenes 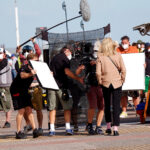 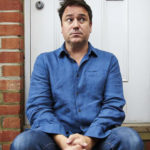