“Welcome to the Jeremy Corbyn fanclub” 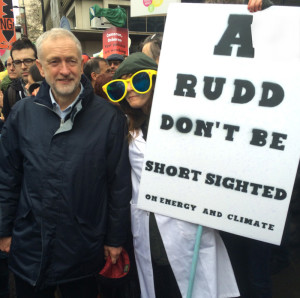 On Monday 25th January around 50 Hastonians gathered in The Jenny Lind to express their interest in Momentum, a National group that has set up a Hastings branch thanks to local Labourites Kay Green and Tariq Persuad Parkes. The event was an opportunity for people to meet and see if there would be enough interest to start a local group. Evidently there was.

Momentum formed as a result of Jeremy Corbyn’s landslide victory in the 2015 Labour Leadership contest, and the consequent doubling of Labour membership over the past 6 months from around 200,000 to 388,000. Locally, Battle Labour Party reported an increase in membership from 18 to 240, the Hastings branch has more than doubled the 474 subscriptions and membership now stands at 1100.

Momentum was created with the aim of building up support to secure Corbyn’s appointment as Prime Minister in 2020, encouraging local campaigns that relate to his agenda and Labour party policy. The main campaigns nationally: to renationalise railways, create environmental and social jobs, oppose war in Syria and oppose cuts to working tax credits. Currently active campaigns include increasing voter registration, opposing the Union Bill and supporting the Junior Doctor’s strike.

If Corbyn is to be successful in forming ‘a new kind of politics’ it will have to be of the kind that his followers would demand: democratic, grass-roots and progressive. Momentum sells itself as the machinery that will be able to facilitate direct democracy behind the back of the current Labour body politik which institutionally bars such ‘bottom up’ parvenue.

This explains the need for Momentum as something separate from, yet connected to, the Labour Party. It is a safe space for Labour members to meet who share the experience of being a left wing Jeremy Corbyn supporter without having to debate fundamental issues like whether or not to support military action in Syria, whether to renew Trident, or cut welfare spending. Momentum supporters are in broad agreement on these issues.

To understand the logic that drives the resistance and outright phobia of Jeremy Corbyn from the right-wing of the Labour party is to understand the importance of the aspiring middle classes living in certain swing seats; it is these voters who matter, and no others.

It is apparent here how the philosophy of Momentum is opposed directly to this mantra. If all people matter, and if everyone has a say, then the Labour party cannot build a political vision based on a top-down manifesto catering to an incredibly small section of the electorate.

“We must win the machine, undo what Blair did, and give the party back to its members” said one attendant at the Hastings Momentum meeting.

« A taste of Honeysett (Review)
Grassroots football in mudslide »