Shadow chancellor John McDonnell came to Hastings on 21st July to talk about local issues and how the Labour Party are preparing to address these issues with a local manifesto written from within the community. This was part of a series of what are being called Town Meetings and an opportunity to campaign as Labour prepare for another general election. 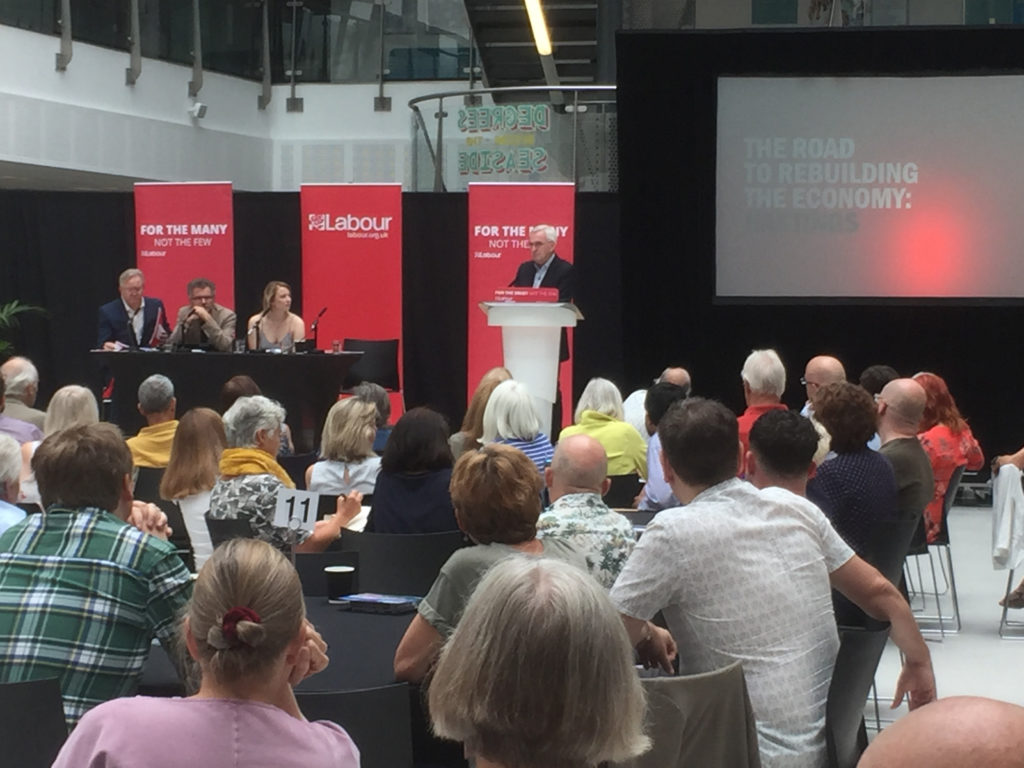 In an interview with BBC South East Today McDonnell said, “We believe that it would be better to have a general election now, that way people can decide on the team that they want to negotiate the Brexit deal and the nature of that Brexit deal. We’re calling now for a general election, saying to the Tory party ‘just move aside now, you’ve had your chance and you’ve failed.’”

In an address at Sussex Coast College Hastings Lara McNeil, of the Labour National Executive Committee, opened the discussion, giving a personal account of growing up in Hastings, studying at Parkwood 6th Form, and going on to study at medical school; Lara gave her own experience of the dangers of austerity, academies as a privately owned educational model and highlighted the £10M cut in social services announced by East Sussex County Council.

Next to speak was Peter Chowney – local parliamentary candidate for the Labour Party. Peter raised the complexity of addressing the needs of Hastings and Rye, which includes both urban and rural areas, citing local issues, such as gentrification, the need to protect and invest in our fishing industry, transport links, low pay, unemployment, skills gaps, intergenerational unemployment and pockets of extreme deprivation.

John McDonnell then took to the stage to give examples of how the Labour Party could address these issues by preparing for the ‘4th industrial revolution’ and new technologies by utilising a national investment bank and regional investment banks. John paraphrased the late Tony Benn, saying that he wanted to bring about what Benn called the “fundamental and irreversible transfer in the balance of power and wealth which has to take place”: bringing water, rail and mail back into public ownership, implementing a living wage of £10p/h, introducing rent controls, providing free childcare for children between two and four years old and other Labour policies that would benefit Hastings.

The final address was given by Peter Dowd, Shadow Chief Secretary to the Treasury, who outlined how Labour planned to invest in people through skills, physical infrastructure, digital infrastructure, research and development.

The attendants then broke out into working groups before feeding back.

What would have been a low-key campaigning event became internet famous after Amber Rudd chose to respond to John McDonnell’s visit by recording and publishing a video recorded from the end of the pier. The address features our local MP flanked by seven regularly featured Conservative activists extending a ‘proper welcome’, the video opens with Amber:

“John, it was a surprise to see you this morning outside of Hastings College. But, I wanted to give you a proper welcome, so I’ve brought along some friends to highlight some of the fantastic things about Hastings. Because I’m concerned that the points that you’re making about towns being left behind are nothing to do with Hastings. This is a town that’s received record investments since 2010 and is really getting the benefits from that. So I’m here to welcome you and I’m standing on one of the fantastic icons of Hastings, the pier, the award winning pier, of which we are all so proud. But we have lots more things to celebrate in Hastings. We have a phenomenal art community, music community and of course local comedians, such as Eddie Izard, Jo Brand and Peter Chowney!”

The video continues – it was viewed 100,000 times in the first 24 hours, attracting comparisons to Alan Partridge, Ricky Gervais and an Arcade Fire tribute band; people have created Photoshop edited stills and psychedelic remixes.