“Slavery is the culture in other countries,” said Tory Cllr Mike Edwards during a full council motion discussing modern-day slavery in Britain.

Actually, climate change is a class issue and an international social justice issue. It affects all of us.

Some of the Conservatives on the council just didn’t want to hear – they seemed oblivious to the news that 39 migrants had just been discovered dead in a shipping container in Essex.

I was heckled to such an extent that I was forced to stop speaking and to sit down – completely drowned out by councillors who were either deeply offended by what I was saying, or had clearly not joined the dots. Climate change injustices impact the most vulnerable both in the Global South, and in Britain.

I was arguing that Britain needs to acknowledge its role in causing climate change, and, by way of reparations, pass motions like the one being discussed – protecting (often illegal) migrants from modern day slavery.

Earlier on in the council meeting I had talked about the importance of recognising past injustices, which had allowed this country to prosper on the backs of African slaves, an injustice which financed the Industrial Revolution, which was then fueled by abusive working practices forced on the working classes of this country.

It was this industrial revolution which paved the way for runaway climate change, the extreme levels of CO2 in the atmosphere today, and the ethos of taking from nature and abusing the most vulnerable. Banning modern-day slavery in Hastings joins up all these dots. It recognises that people are often forced to leave their homelands, it recognises that this country has played a role in that, and that we have a responsibility to provide people who land here with a safe environment.

I am a Labour Councilor, we have proposed to go a step further; upon getting elected we will put into practice a Green Industrial Revolution, as part of a Green New Deal, which would see the creation of 400K green jobs, 20% of the profits going to deprived seaside towns from 37 off-shore wind farms, 1.8 million economically marginalised homes fitted with solar panels, £3 billion into the automobile sector to electrify plants… the list of exciting plans goes on and on. And as part of our acknowledgement and responsibility to the global south, Britain will share, for free, developments in green tech industry.

I felt it relevant to talk about my experiences, namely, running Afghan Peace Volunteers, which works in solidarity with a non-violent youth group in Kabul.

Only minutes previously, Cllr Lee attacked me for my carbon footprint “flying around the world” – I assume a reference to my recent trip to Afghanistan in February. I’m one of the few people in this country who regularly braves the threat of kidnap and bombings in now the most dangerous country in the world. I travel without security, staying with Afghans, collecting the stories of hidden voices you would otherwise never hear.

Despite this exceptional experience, some decided to shout over me, making it impossible to share my first-hand eyewitness account of what life is like for some of the illegal migrants who land on our shores, many of whom are Afghans.

Ten years of austerity, initiated by the malpractice of bankers, which triggered a global economic slump, has left 4 million people in Britain living in extreme poverty. It’s now commonplace to hear stories of people in Britain taking their own lives due to financial difficulties, being evicted from their homes, and delays in Universal Credit. It is being described by some as “economic murder by government”.

If we are to successfully tackle this crisis then people need to join the dots: countries in the global south need to be supported and prioritised in the same way economically marginalised people in Britain need to be prioritized with the allocation of green tech jobs and free renewable energy.

Socialism will be necessary to tackle climate change. 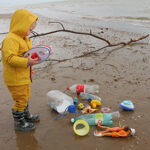 « Passing of the Light
Tax Questions and Answers »