To provide an early warning system for fascism Gregory Chatfield follows the antics of Boris Johnson and Donald Trump, both leaders seemingly immune to truth and pressing the same emotive buttons as 20th century fascists.

Johnson refused to back British ambassador Kim Darroch in the face of attacks from Trump, leading to Darroch’s resignation.

Trump engaged in a sustained attack on Congress Representative Ilhan Abdullahi Omar in front of a baying crowd chanting “SEND HER BACK, SEND HER BACK!” One supporter said he’d “Put a bullet in her.”

Johnson has threatened to suspend parliament to push through Brexit.

Trump held a press conference for religious persecution survivors. Nobel laureate and Iraqi Yazidi human rights activist Nadia Murad requested aid for the Yazidis; Trump replied: “And you had the Nobel prize? That’s incredible. They gave it to you for what reason?” When asked by a Rohingya refugee about the plan to help his people, the US president replied: “Where is that exactly?”

Johnson and Trump have both been accused of assaulting women and have refused to address questions on the subject.

Johnson and Trump are both in regular contact with Steve Bannon who is funded by the Mercer family.

Johnson has been endorsed by the British Nationalist Party.

There are detention camps on the southern US boarder where children are separated from parents and have basic sanitary items taken away. More next week… 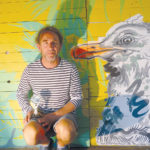