Bombing in the Middle-East

News that the UK was involved in a bombing mission in Syria was announced by Donald Trump at a press conference and shared on Twitter at 2.30am on Saturday 14th April. The US president opened the press briefing with the following statement:

“A short time ago, I ordered the US Armed Forces to launch precision strikes on targets associated with the chemical weapons capabilities of Syrian dictator Bashar al-Assad. A combined operation with the armed forces of France and the United Kingdom is now underway. We thank them both.”

Theresa May held an equivalent conference for the British press shortly after:

“Last night British, French and American armed forces conducted coordinated and targeted strikes to degrade the Syrian regime’s chemical weapons capability and to deter their use. We are acting together with our American and French allies.”

Later in the day Jeremy Corbyn wrote to Theresa May requesting that she publish legal advice received by the Attorney General on the legality of the strike and requested that bombing should stop to allow investigations to take place:

“Given that neither the UN nor the OPCW has yet investigated, it is clear that diplomatic and non-military means have not been fully exhausted.

“It is now vitally important that the OPCW inspectors, who are due to arrive in Douma today, are allowed to do their work and publish their report into their findings – and report to the United Nations Security Council.

“I would therefore welcome your assurance that there will be no further bombing raids while OPCW inspectors are on the ground. They must be allowed to complete their inspections without hindrance.”

The Damascus-based Syrian government released a statement claiming that the US-led attack was a reaction by the West to its military advances and the defeat of Western-backed Islamist rebels, and urged the international community to condemn the ‘barbaric’ aggression:

“The Syrian Arab Republic condemns in the strongest terms the brutal American-British-French aggression against it which constitutes a flagrant violation of international law and the principles and purposes of the UN Charter.” the Syrian Foreign Ministry said in a statement, cited by the Syrian Arab News Agency.

Retired senior Naval Officer Lord Alan West has questioned whether the chemical attack in Syria was the work of President Assad’s troops:

“We need unequivocal proof that this attack was done by Assad’s forces –I’m not at all convinced at the moment.” he told TalkRadio’s Julia Hartley-Brewer.

“If I’d been advising the opposition, I’d have said ‘get a barrel of chlorine, at some stage there will be bombs dropped on you – blow it up and we can blame them, because what we really want is the allies coming in’.” 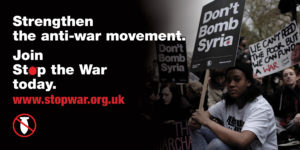 Former Commander of British Armed Forces Major General Jonathan Shaw also questioned the motive for the attack, suggesting that there was no motive for the Assad government to launch a chemical weapons attack, asking “What possible motive might have triggered Syria to launch a chemical attack, at this time, in this place? The Syrians are winning.” He went to explain that before the chemical attack the US were preparing to pull out of the conflict but was cut off by a Sky News presenter before being able to make his case.

Mail on Sunday columnist Peter Hitchens has been one of the most outspoken voices in demanding evidence to back up the video purporting to show a chemical weapons attack by the Assad-controlled government, tweeting “Who made these videos? Who
is the doctor? At the time the area was under the control of an
armed and fanatical Islamist faction called Jaish al Islam which was accused by Kurds of using gas against them in Aleppo in April 2016. No independent sources can operate in such places.”