Hastings will celebrate International Women’s Day (IWD) on Sunday 10 March by way of a special free event organised by Hastings Women’s Voice.  Following a short march from the pier, the event itself will take place at the Azur Marina Pavilion and will run from 2 – 4pm.  All are welcome to attend this afternoon, which will feature music, theatre, discussion and taster sessions.

Started in the early 1900s by suffragettes from a number of countries, the first officially named IWD event was held in 1911. Ever since then the day continues to be a powerful global platform that unifies a drive for gender parity, whilst at the same time celebrating the social, cultural, economic and political achievements of women.

Hastings Women’s Voice have been active since 2006, were officially constituted in 2010, and gained charitable status in 2016. Their overall aim is to promote women’s empowerment and to support equality for women locally, nationally and internationally. Moreover they aim to bring together women from different backgrounds to raise awareness and understanding of their respective lives. Ann Kramer tells me that the group’s long term goal is to establish a thriving women’s centre in the town.

The community group will also use this occasion of this year’s IWD to launch a new project ‘Finding Our Voice’, which will be run throughout the coming year.  This initiative has several strands which will ultimately combine to establish a much needed women’s peer support network in Hastings and St Leonards. Working to form such a powerful yet informal network is so important after years of austerity and cuts have eroded resource levels and particularly disadvantaged low income women.

There will be a creative aspect to the project which will enable women to develop practical creative skills in a number of workshops. Alongside this there will be opportunities to be involved in cooking and physical fitness activities. ‘Speakers Corner’ will enable participants to develop public speaking skills and to become more empowered in conversation. There will be free taster sessions for the different strands of ‘Finding Our Voice’ at Sunday’s event.

The ‘Finding Our Voice’ project has been made possible after Hastings Women’s Voice were awarded money from the Tampon Tax Fund (TTF). What is the TTF? Tampons and other sanitary protection products are currently classed as ‘luxury’, ‘non-essential’ products. Whilst the government has committed to ending the 5% VAT still paid on these items, they claim it is a complicated process to do this under current EU legislation. Until such time as this clearly discriminatory added cost is stopped, the government has pledged that the £15m raised by the levy annually will be dispersed to support women’s health and support charities. This year one of the benefactors is Hastings Women’s Voice.

Ann Kramer, who is a local writer, historian and activist with over 50 books to her name, is also collaborating with Ashley McCormick, the Head of Learning & Participation at the De La Warr Pavilion to give an interactive talk called ‘Turbulent Spinsters and Badass Sisters’ at 2pm on Friday 8th March at the De La Warr Pavilion. This talk will focus on stories about local women’s fight for suffrage and celebrate the power of sisterhood. It will involve an exhibition walk-through and discussion around suffrage, resistance strategies, feminist discourse and social justice.

• All those who want to take part in the march and subsequent events to celebrate IWD are invited to assemble outside the pier at 1.00pm on Sunday. Doors will be open from 1.45pm. Children are welcome, and tea and coffee
will be provided. 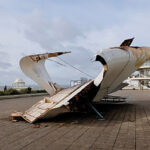